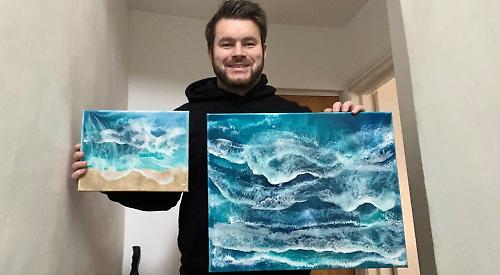 A SELF-taught artist says he has lockdown to thank for his newfound creative direction.

The 30-year-old now does his job from home, but during the first coronavirus lockdown last year he was furloughed.

Finding himself with time on his hands, he was free to revive his long-standing interest in art.

Liam, who previously ran a small candle-making business, says: “I’ve always been quite a creative person and I’ve always looked for different means of creating artwork.

“I was looking online and I discovered people doing furniture and the like using epoxy resin.

“I’m confined to a one-bedroom flat and I don’t have any work space for anything on a large scale.

“So I started experimenting with epoxy and canvases because it was the only thing I could really do in such a small space.”

Liam’s artistic experimentation eventually resulted in a series of ocean-themed paintings, a number of which show waves washing on to a seashore.

He says: “My partner’s from Devon and my family heritage is also from Devon, so that’s kind of the inspiration — a love of the sea and the outdoors.” Because the image is built up in stages, each painting takes Liam around three days to complete.

He says: “The material is a two-part plastic, basically. You have the resin itself and then you have a hardener.

“When you’re working with it, it’s completely malleable — and it’s fluid. It’s no different to working with an acrylic paint or something like that. The catch with epoxy is that where you can leave a paint to dry for a few hours, between each layer of epoxy there’s about a 12- to 24-hour cure time.

“Then it sets hard like plastic and has a really high-gloss finish.

“And through doing that it gives you a kind of realism with the water, a real depth on the canvas, because I can do up to three or four layers. You can see a 3D effect through some of the layers that I’ve applied. The final coat is usually where I’ll do a clear coat.

“I’ll have some white colour running through it and that’s what gives the foamy wave effect.

“But you can see where some of the layers are and I think that kind of adds to it. So it’s not just a flat piece of artwork — there’s actually an extra dimension to the layers.”

A former pupil of Gillotts School, Liam says his formal art training ended after he took the subject for GCSE.

But his satisfaction with his new artworks means he has started to share images of them on his Instagram account @crafty_yeo and has set up an Etsy store under the same name to sell them.

Liam says: “I’ve made one or two sales through that avenue, but I’m very much open to seeing where it goes and seeing who picks up on it.”

Looking to the future, he would like to have the chance to show his work in a gallery .

Liam says: “When we’re stuck at home I guess we all scratch around for things to do. I wanted to bring a smile to people’s faces and show that anything is possible behind closed doors while we are under covid restrictions.”