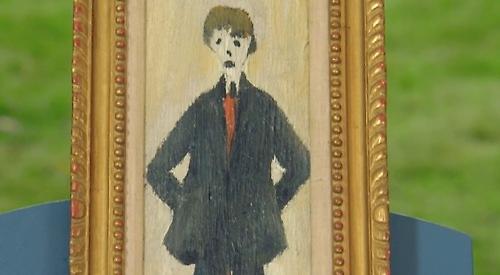 AN L S Lowry painting was valued at nearly £80,000 when the Antiques Roadshow came to Stonor Park.

Art historian Lawrence Hendra shocked the owner, who had paid £1,300 in 1998 for the portrait, called Figure Standing One.

Works by Lowry, who was based in Manchester, have been copied frequently so Mr Hendra was initially worried it could be a forgery but a letter from the Lefevre Gallery in London confirmed its authenticity.

Filming took place for the BBC programme in August over two days and the episode was aired on Sunday.

Host Fiona Bruce opened the show by driving up to the iconic Stonor House in a red Aston Martin v8 vantage as she explained the location’s connection with the James Bond films. It was used as the secret MI6 safe house in the 1987 film The Living Daylights.

Bruce explained that, as well as being home to the Stonor family for 850 years, the estate also featured a 12th century chapel and prehistoric stone circle.

Among the other items to be valued was a 1942 Royal Air Force badge, which was given to Americans before the US joined the Second World War, and was estimated at £3,000. Expert Mark Smith said these were the rarest RAF badges for this period and could not be found for sale anywhere.

During the programme, Bruce gave a brief history of the Stonor family, explaining the “repression and persecution” faced by the Hon William Stonor’s ancestors as leading Catholics when Henry VIII broke away from the church and set about the reformation that turned England into a protestant nation.