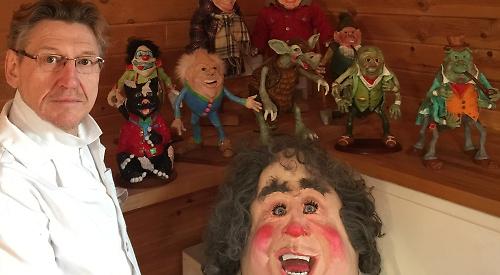 A MAN from Wyfold has used his free time during the lockdowns to create small fantasy figures from modelling putty.

David Palmer-Stevens has been drawing all his life but the coronavirus pandemic allowed him to experiment with making 3D models which he sells online.

Using milliput, an epoxy putty, and papier mâché, he has made up to 30 different characters, each about 1ft tall.

He decided to create the fantasy creatures when he found some milliput left over from fixing a pipe at home, where he lives with his wife Geraldine.

Mr Palmer-Stevens said: “My daughter, Katie, used to run the Fresh Air Free Theatre Company about 10 years ago and she put shows on for children so asked if I could make some puppets for her to use.

“I made them out of papier mâché and it was so easy and I really enjoyed it. Since then I have just kept dabbling, hoping to get better, and then everything changed with all the time in lockdown.

“After fixing some pipes I came across the milliput and I thought, ‘Why not cover the papier mâché with it and then make the puppets into models?’”

Mr Palmer-Stevens, who used to work in the computer industry, has made different animals, including spiders, pigs and cats.

Most of the models have sold online for about  £15 to £30, which means he barely breaks even after the cost of the materials, but the most expensive was a model of Frankenstein’s monster which went for £90.

Mr Palmer-Stevens uses plywood for the structure of the body, which he then covers with papier mâché, and milliput.

The hair is faux fur, which is glued on, as are the acrylic eyes. The models are then finished with acylic paint and varnished.  Milliput is a two-part resin that when mixed is like plasticine and dries quickly so is ideal for mending water pipe leaks.

Mr Palmer-Stevens has about 35 to 45 minutes to mould it before it becomes too hard.

“You have to work fast and that’s what I enjoy,” he said. “The puppets I used to make were quite big so I thought I’d make something smaller. I am quite tall with big hands so it was a challenge but I really enjoyed it.

“As you’re working so fast you need to have an idea in your head of what you want it to look like first. I don’t plan I just decide I’ll make this and the idea just pops into my head. I can start with the left foot and then create the rest.”

Mr Palmer-Stevens has also made models for his family and friends, including a spider to help his grandson get over his fear of them. He said: “I bought a Doctor Who spider toy, which is huge, and I took it apart and put it back together with milliput and made a cute spider. It was really sweet and friendly and that got me into making others”

Mr Palmer-Stevens said he drew a lot of inspiration from children’s illustrations, especially ones by  Scott Gustafson.

He said: “I collect children’s books but the one I have bought loads of is Classic Fairy Tales, which I use for presents.

“I also get inspiration from my surroundings. For example, Geraldine suggested doing a pig and there was only one image in my head which I remember from a poster in a train station at Carmarthen. It said ‘A pig called Henry’.”

Mrs Palmer-Stevens said her husband’s models were “not her thing” but she does have an insect figure that sits on her piano.