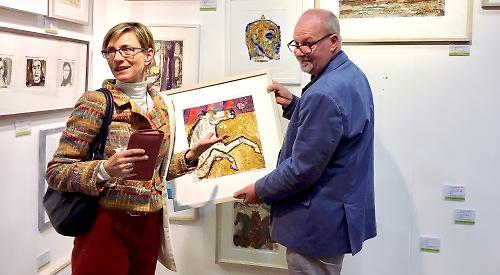 BERLIN Walls curator Simon Hearnden is returning to the Old Fire Station Gallery behind the town hall today (Friday) with his latest exhibition.

The art dealer, who six years ago sold his house in order to buy up the life’s work of the late Walter Lindner (1936-2007), will be displaying his latest finds from the German capital.

These include works by the flamboyant painter and dancer Alexander Camaro (1901-1992), whose art was banned by the Nazis.

After the war, Camaro was professor of painting at Berlin’s fine arts university, the Hochschule für Bildenden Künste, where he overlapped with the student Walter Lindner.

Mr Hearnden has also developed an interest in the colourfully designed posters produced by the Berlin Tourist Authority in the years following the Second World War.

Some of the most memorable of these were designed by Richard Blank (1901-1972), whose work is included in the latest exhibition, which runs until Tuesday, May 18.

Mr Hearden said: “These posters were colourful, often with a strikingly simple appeal. The tourist authority turned to vivid designs as Berlin tried to show the world that it was still ‘cool’ despite much of the city lying in virtual ruin.

“There were no nice parks, streets or shopping malls to photograph, so they turned to design.

“Blank was a respected typographer, also at the Hochschule, and he was recruited to help interest tourists to consider visiting Berlin as it strove to rebuild the shattered economy.

“I was delighted to find that he almost certainly taught the young Walter Lindner typography and graphic design as well.”

An early edition of Blank’s iconic 1955 poster “Berlin: Sehen, Kennen, Lieben” (“To see, to know, to love Berlin”) is among the works going on show.

Mr Hearnden said: “It has been a difficult year for so many people and I have had a number of my exhibitions and art fairs cancelled again for the first part of this year, so I’m delighted there was a space available for me to exhibit at the Old Fire Station again at fairly short notice.

“I had a highly successful exhibition here last autumn, in between lockdowns, and it’s always great to be back in my home town.”

• The Berlin Walls exhibition is open daily from 11am to 5pm.