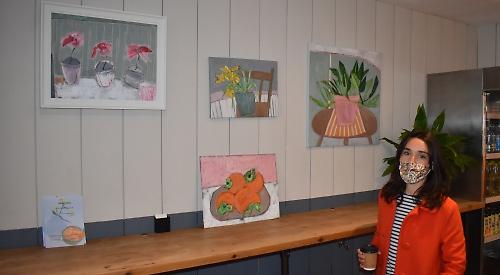 A FORMER immigration lawyer has become the second artist to have her work showcased on the walls of a Henley café.

Diana Forbes, from Harpsden, has followed in the footsteps of Henley designer and illustrator Freya Louella, whose work was displayed by Spoon in Duke Street in April.

While no end date for her exhibition has yet been set, Diana thinks the café will be putting the work of a different local artist on show every few weeks.

“It’s so nice of them to be supportive and to say, you know, artists can step out now and show their works again,” says Diana.

“I’ve always liked it there and it does lovely food. They’re a really fun and outgoing bunch there and there’s a great atmosphere.”

Diana, who has her own website and posts updates about her work on Instagram at dianaforbes.art, says she was contacted by Spoon assistant manager Sarah Gummer a few weeks ago.

“She emailed me and said, ‘We’re doing this exhibition for local artists and would you like to be part of it? We really love your work’.

“So I met with her and then she selected from different mediums, canvas and paper, and we put together this little exhibition.”

Though she has never had any formal art training other than what she was taught in school, Diana grew up in a household where her mother was a keen crafter and her father painted as a hobby. Born in Leipzig, in the former East Germany, in 1985, Diana says these formative influences were critical to her creative development.

“We had quite a famous sculptor in the family as well, my great uncle Hans Förster. He used to sit down with me and make little flowers out of clay and things like that.”

Diana was just four years old when the Berlin Wall came down in November 1989.

“I don’t remember much of that day when it happened,” she says. “I just remember going out and feeling quite panicked that people would be out on the streets celebrating their freedom.

Following German reunification, Diana’s family moved to live near Frankfurt, where she spent most of her childhood.

She later returned to Leipzig to study law at the university before entering the profession.

“I worked for an American law firm in Frankfurt to begin with, so I was surrounded by Americans and Australians,” she says.

“I was used to an English-speaking environment and the clients were all English-speaking. Then I moved to Australia and lived there for nearly two years before I transferred to London to open up an office.”

It was while working in London that Diana met her husband, a property developer, with whom she now has two sons, aged four and seven.

Before getting married and having children, she took the opportunity to go travelling.

“I never had a gap year during university or A-levels, so I took that time off after a couple of years of working and just wanted to see where it took me and if I really wanted to stay in this profession.

“Even then I probably felt that I needed to break out of it a little bit. I wanted to do something different, but when I came to Australia I ended up working again — and again in London.”

It was having her children that helped provide the catalyst for Diana’s new career as an artist.

“You do arts and crafts with them and you go out on nature walks with them and you use different materials — and it kind of brought back what I learned as a child,” she says. “I was always surrounded by very creative people growing up and therefore it felt very natural and it just seemed right to do it again. Really jump into it.”

Diana has been marketing herself as a professional artist for the past two years and has also taught workshops locally.

She says: “I strongly focus on collage works and I do a lot of works on paper. Everything I do, all the mediums I use, are hand-painted. There’s a lot of texture to them and everything is hand-cut.

“I do work on canvas as well, with acrylics and oils — again quite textured, to the point where it always looks a bit 3D.

“I use a lot of recycled materials, so it can be cardboard sometimes, which I then prime so it’s really kind of preserved.

“And then the colours as well — I work quite often with commercial projects. I work with brands and I kind of see what I can do for them in terms of what their colours are.

“They give me their colours and then I kind of create something for them and turn it into product for them. So there’s a commercial side of it, but I work for myself and create my own works as well.

“A lot of the works that I do now are still lifes because that’s what you have at home. It’s easy to set up. It’s what you can get from the garden and having ceramics at home and using those. So it’s just whatever’s in your house.”

Living near Chalk Hill, Diana has incorporated the material into her work.

“I actually go there and collect some chalk on my walks,” she says. “I grind it down at home and then I mix it into my paints, again to create a texture. The same with charcoal. I use a lot of charcoal, literally from the fire at home. I’m just excited to play, you know?”