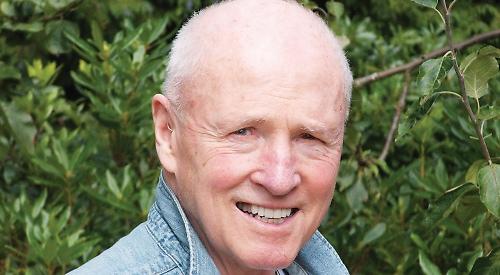 THE Watlington White Mark is the subject of a new painting by an artist who lives in the town.

James Kelso is to submit the oil painting for inclusion in the Royal Academy of Arts’ summer exhibition, which will be held from September to January.

The chalk scar was dug into Watlington Hill in 1764 to give the illusion that the town’s church had a spire.

Local squire Edward Horne designed the 82m shape so it appeared above the parish church of St Leonard when viewed from his house.

Mr Kelso, who lives in Gorwell, said he had painted the mark before but wasn’t happy with the results.

He said: “I’ve always been interested in painting the mark as it is a well-known landmark and I’ve walked up the hill many times during the years.

“I have painted various places in and around Watlington but I found the mark was particularly difficult to paint as it’s colourless and it is difficult to make it interesting.

“Then while I was on a walk on the hill, I saw a red kite dropping an object and a crow picking it up and that sparked my imagination and provided inspiration for this painting.

“Imagining that the object was a face mask made it relevant and timely and put a time-frame on the painting without the need to add a date to it.” The mask’s red and white fabric draws a connection between this painting and some of Mr Kelso’s previous works which feature objects with the same pattern.

He said: “It’s my habit when painting to tuck a red-spotted handkerchief in my waistband to use as a rag to wipe brushes on. My painting days came to be known as red spotty days.”

Mr Kelso is a self-taught artist who works with acrylics, oils, watercolour and graphite on board and paper.

His work has often been exhibited at the Royal Academy as well as at other London venues, including the Royal Festival Hall and the London Stock Exchange. He has also exhibited at galleries throughout America.

His paintings are in private collections in America, Australia, Britain, France and Sweden and prints have been sold worldwide.