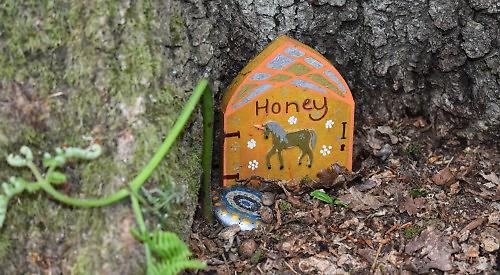 A WOMAN has created a fairy trail in woodland in Gallowstree Common.

Nicola Stone painted miniature doors and placed them on trees near Nippers Grove, off Wyfold Lane.

She came up with the idea after visiting friends in Northern Ireland who had created a fairy forest in their local village.

“I thought, ‘I could do that and it would entertain my nephews’,” said Ms Stone, who lives in Caversham Park with her dog LC and works as a housekeeper in Henley.

“I haven’t done it on a scale as grand as my friends but it was a bit of fun and it kept me entertained.”

To create her trail, she bought some acrylic paint and pens to decorate the miniature wooden doors made by her father Lloyd and then placed them on and around trees.

“I started with five or six,” she said. “I first put them out on February 14 as I wanted them ready for half-term.

“I love being creative, cutting, sticking, painting, and I believed in fairies when I was a child.” She said the doors helped her nephews, Lucas, six, and Oscar, one, to get out more during lockdown.

Ms Stone said: “If you mentioned walking to Lucas he used to get upset but suddenly there was a reason to go for a walk and that was the same for a lot of kids.

“And there is a reason for me to go out — fairy maintenance.”

After the first few doors were placed at the old Wyfold Castle Plateau Fort, walkers began to notice them so Ms Stone decided to add more.

She balances them against the bottom of tree trunks or uses a small nail to hammer them in higher up.

She also clipped some fairies to branches using pegs.

She decorates the doors with fairies, horses and unicorns. There is also a 10 Downing Street door and a rainbow door for the LGBTQ+ community.

Ms Stone, who is a volunteer for Wyfold Riding for the Disabled, said: “A lot of the doors are named after ponies at the charity and my friends. I named one fairy Honey after the pony I had when I was child and others Lucas and Oscar after my nephews.”

Other people have been adding their own fairy doors and also started a rock exchange where children decorate pebbles and swap them with others they find.

Ms Stone, who used to ride horses through the woods when she was younger, said: “It’s nice that people are taking pleasure in something you’ve done and it doesn’t take money to do it. It was cheap and safe to do. I’m just sorry I didn’t start before February.”

She visits the woodland to add more doors and fairies at least once a fortnight and plans to carry on to make it a full circular trail.

Ms Stone has also set up a Facebook page for people to share their pictures and to help people find the woodland. For more information, visit the page called “Gallows Tree Fairies”.