Art show’s the antidote to what has gone before 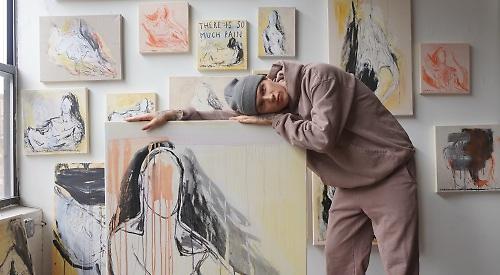 AN art dealer known for his “Berlin Walls” exhibitions of 20th century German artists is branching out with a new show featuring contemporary works.

Simon Hearnden’s most recent show at the Old Fire Station Gallery in Upper Market Place finished on May 18.

But he is making a swift return today (Friday) with his latest exhibition, under the name “Antidote Gallery”, which runs until Tuesday, June 16.

Simon said: “My Berlin Walls show in May went really well. In fact, it was my most successful event ever.

“Numbers were actually down a bit on what I’d hoped for, considering I did a lot of marketing. I mean, we leafleted the whole area.

“But my sales were way above expected and people were back in who would not normally buy.

“So there’s definitely a bit of lockdown fever about. You know, we’ve been staring at the walls for a year and we’d better fill that space with something.

“I think I was selling to people who would have looked at it two years ago and gone, ‘Yeah, I like it but, nah, I’m not going to spend that money.’ And now they’ve sort of gone, ‘Oh yeah, we’ll have that.’

“It was a very positive vibe — there was a kind of buzz about it.”

With the Government’s planned easing of lockdown currently proceeding on course, Simon literally wants his new exhibition to be the antidote to the restrictions of the past year.

He said: “I’ve managed to register the name Antidote Gallery, which is quite nice.

“One antidote is getting out and getting involved with life again and seeing things and being in contact with people and buying things and enjoying culture.”

With a focus on nudes and figurative works, Simon’s latest exhibition draws on his extensive journeyings through the art world as a collector, dealer and curator.

He said: “Basically, some of the young artists I’ve met on my travels I’ve got a bit involved with and I’ve said I’ll start trying to do some exhibitions of their work. And it’s more sort of contemporary. I’ve no idea whether it’s going to go really well or whether it’s going to be too out there for Henley but I have got one particular artist who’s starting to really make waves.”

The artist in question is Oxford-born Patrick Church, who now lives and works in Brooklyn.

Simon said: “I’ve not met him but he had an exhibition at the Saatchi Gallery last year between the lockdowns and he has gone up from 20,000 Instagram followers to over 125,000, so he’s obviously making a splash.

“It’s quite a coup, I think, for Henley to have his work going on show.

“I am delighted to be able to showcase some striking figurative works by an artist of real heavyweight potential.

“Patrick is a celebrated painter and multimedia artist whose works can generate a spirit of optimism within a spirit of permissiveness, giving admirers encouragement to go ahead and claim the identity they might desire rather than one they have been conditioned to hold on to.

“He paints from a personal and provocative point of view and his works are often riddled with humiliation and desire in turn.”

The art historian Sir Norman Rosenthal has called Church “a true painter”, adding: “That’s no easy thing to be in an age dominated by new media forms of self-expression in all its positive and insidious forms.

“Deep down, Patrick never shirks from what he paints from — the melancholy and intrinsic sadness of reality. If on the surface he seems exuberant, underneath everything he plays dead serious.”

One well-established name with work in the show is the veteran British pop artist Allen Jones. Born in 1937, he is best known for his paintings, sculptures and lithography. Simon said: “Few artists inflame debate like Allen Jones. Celebratory, satirical and boldly inventive, his work embraces popular culture and has in turn influenced everything from design to film and fashion.”

The work of Jones going on show at the Old Fire Station Gallery is an original artist’s proof of the “Paso Doble” publicity poster that Jones created for the 1983 Royal Academy of Arts summer exhibition.

Simon is hanging between 50 and 60 artworks for this exhibition.

Entry is free and the exhibition is open daily from 11am to 5pm.