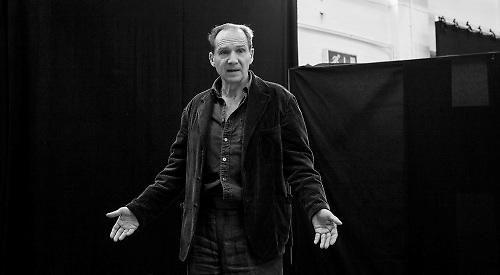 Each looks like an off-cut from Stonehenge or perhaps a tombstone worn smooth by time, an “illegible stone” in a phrase from Little Gidding, the final poem in the sequence.

Yet these massive blocks are a deceptive part of a striking set designed by Hildegard Bechtler. They can be shifted and swivelled with ease by Fiennes as he leads us through the maze of Eliot’s difficult and tantalising masterpiece.

They block off and they open out. Sometimes they are walls or the countryside bank of a “deep lane”, sometimes they are doors to a different world, to the past or future or perhaps to eternity. Ralph Fiennes handles the poems with the same hard-won ease.

TS Eliot wrote Four Quartets over several years before and during the first half of the Second World War. They reflect some of the anxiety of that time, for example with the fires of the Blitz dominating the last poem, and visually represented in the striking lighting design by Tim Lutkin.

But Eliot’s poems rise above local historical concerns, even momentous ones like war. They are simultaneously inside time and outside it. The imagery of fire has spiritual, purging associations, and links with Eliot’s Christian belief. It’s also one of the basic elements — along with air, earth and water — that are summoned up in each of the four pieces.

Each poem too recalls a place that was close to the poet’s heart, whether it is the Massachusetts shoreline of Eliot’s youth in The Dry Salvages or the Somerset village, East Coker, which gives its name to the second poem and which is the place from where an ancestor of his departed for America in the 17th century.

All of this makes the poems sound complicated and abstract, which they are in places. But they’re also full of physical detail, often conversational in tone, sometimes riddling, but also autobiographical, or dry and witty Sometimes they sound like prayers or incantations.

Ralph Fiennes, who is also director of the production, adapts himself to each moment, whether imitating one of Eliot’s wartime BBC broadcasts or stomping his feet in imitation of a rustic dance or kneeling in prayer or engaging directly and confidentially with the audience.

He doesn’t so much unravel the mystery of the Four Quartets as dramatise and heighten it, all the while keeping our attention.

The performance, lasting around 80 minutes, was very well received on its first night at the Oxford Playhouse. A full house — or as full as possible under current circumstances — was kept rapt under the spell of this strange, demanding but unquestionably great work.