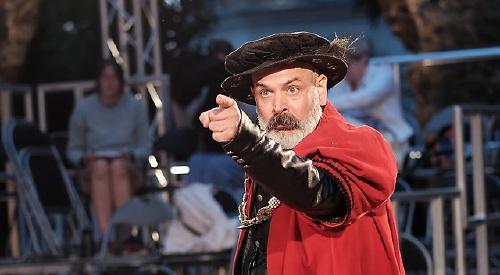 MONASTIC life and religious strife perhaps seem unlikely topics for drama. But there is plenty of theatricality in Rabble Theatre’s production of The Last Abbot of Reading by Beth Flintoff.

Based on the experience of Reading Abbey’s final abbot, Hugh Faringdon, the play is being staged in the ruins of the abbey, 900 years on from its original founding and nearly 500 years since its dissolution.

The Chapter House makes a perfect arena for a production in the round. Uncluttered but clever design, sumptuous costumes and evocative sound transport the audience back to Tudor England.

Alice brings the human touch to events, reappearing at intervals through the show and with hard-bitten humour telling her stories of a life full of tribulation and disappointment.

The audience gets the warning early on that life is far from easy: things can go wrong, as they certainly do for Hugh (Timothy Allsop).

Hugh is a mate of Henry VIII, played ebulliently by Alex Hughes. We see the pair joshing and joking, firm friends so it seems. Henry and Anne Boleyn (Dani McCallum) are regular visitors to the abbey.

But the disgruntled and demanding Anne is beginning to suspect that Henry is turning his affections to Jane Seymour, played with quiet dignity by Emma Denly.

Change is in the air as Henry prepares to review and inspect religious houses. His envoy in this project is the repulsive Dr London, an embittered Tudor jobsworth, taking pleasure in denunciation.

I loathed the character, but loved Dominic Allen’s portrayal of him as deeply insensitive, cruel and snide.

Dr London sets his sights on Goring Priory. In a truly shocking scene, he turfs out the nuns to make their own way in the world.

Dani McCallum is playful and cheeky as Prioress Margaret, seizing the opportunity for a different way of life.

It falls to Brother Jack (Nathan Ives-Moiba) to defend long-held values in danger of being swept away as if they never existed.

Ives-Moiba magnificently and movingly stands up for his beliefs as the future of the abbey is threatened. But what of Hugh Faringdon himself?

Allsop initially plays him as rather cynical and disdainful, dismissive even of his own mother. But as events darken, Faringdon displays steely dignity as he stands his ground against the king.

Ultimately, though, he is a broken man and the audience feels the pathos.

The collaboration between director Jonathan Humphreys and writer Flintoff brings history to life in ways that resonate today.

We see how dismantling religious houses was also dismantling people’s beliefs and way of life.

Robin Kingsland’s admirable Brother John lovingly guards the reliquary, trying to hang on to spirituality in the face of crude scepticism.

We see evidence being falsified in pursuit of power and how loyalties are fickle — Allsop’s bishop believes his friend Henry will not touch Reading Abbey, but he is mistaken and betrayed.

Reputations are easily destroyed and Bishop Hugh, once the king’s favourite, is deemed a traitor.

Don’t miss this marvellous production in the perfect setting. Until Saturday, July 3.