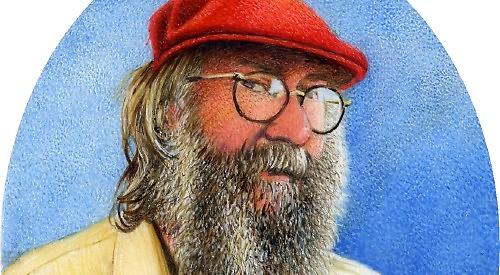 AN award-winning artist from Henley has had his 26th painting included in the Royal Academy’s Summer Exhibition.

Bill Mundy, 84, started painting as a child and is well-known for his miniature portraits of famous people, including the late Duke of Edinburgh and Prime Minister Boris Johnson.

He was first accepted into the Summer Exhibition in 1977 with a painting of the Sultan of Johor.

Bill, a former advertising executive who lives in Wargrave Road, hadn’t submitted a painting for the exhibition for a number of years when he decided to put forward his large mosaic technique watercolour of Chief Otunba Runsewe, who is director general of the National Council of Arts and Culture in Nigeria.

He said: “It’s quite nice to have one accepted once again. I don’t always submit but this year I thought, ‘Why not?’ It’s so many artists’ ambition to get their picture accepted. People try for years and years. There were about 2,000 people who submitted this year and about 500 or so works are displayed so it’s very selective.”

Bill’s painting took him 200 hours to paint and is currently on show at the Royal Academy of Arts at Burlington House in London.

It is his second portrait of Chief
Runsewe. The artist, who is a member of the Royal Society of Miniature Painters, said: “I first met him many, many years ago. He came roaring up in a sports car and said he’d like a painting done.

“He then went back to Nigeria and rang me wanting another one for his numerous offices around the country. I didn’t know who he was at the time but he’s obviously a big wig.”

Bill attended a “varnishing day” at the exhibition on Tuesday which is when artists can do some last-minute varnishing of their portraits. There was a procession for the artists, preceded by a steel band, along Piccadilly to St James’ Church for a service.

Bill said: “Varnishing day is just a bit of a gimmick and I didn’t see anyone doing any actual
varnishing.

“I arrived too late for the procession as I needed to check my painting wasn’t too high that you couldn’t see the mosaic technique but it was at a nice eye level.”

Other notable years that Bill had a painting in the exhibition were 1979 with a picture called Early Apples and 1982 with The Picture Framer. Both works were voted “exhibition of the year”.

In 1984, he displayed a portrait of Prince Philip and in 1991 he exhibited a painting featuring a watch with real clock hands.

Meanwhile, Bill is trying to locate a man he met at the Thames Traditional Boat Festival in Henley in 2019 to gift him a miniature portrait he painted of him.

He said: “He was making ropes and he had a nice beard so I photographed him and had a chat and didn’t think about taking his name or contact details.

“I always take photographs of people who look interesting. I decided to do a little miniature portrait of him but I didn’t know how to contact him.

“He wasn’t at this year’s festival and the stewards said they didn’t know how to locate him.”

Bill wants to give away the miniature portrait as he has been giving away one every month this year.

“I just decided that I have so many paintings I would like to get rid of some,” he said.

If you know the man in the portrait, please contact Bill through the Henley Standard.