Sky’s the limit as far as Rembrandt’s concerned 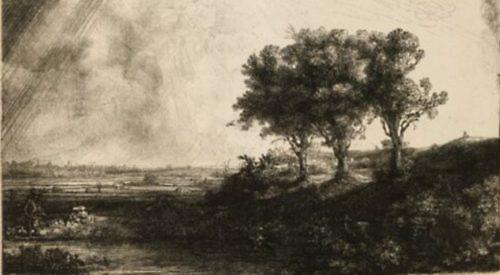 AN exhibition celebrating 500 years of artists’ fascination with the sky opens at the River & Rowing Museum in Henley on Thursday.

Skyscape: The Limitless Art of the Sky will feature works by some of history’s most celebrated artists, including Rembrandt, Albrecht Dürer, JMW Turner, Samuel Palmer, John Ruskin and Paul Nash.

The show, which is the Mill Meadows museum’s autumn exhibition, runs until January 16 and will showcase more than 30 masterpieces from the Ashmolean Museum in Oxford.

Aerial landscapes are explored as a symbol of the divine, as a subject of scientific interest and as a means of emotional escape and expression for both artist and viewer.

The subject of the exhibition was inspired by John Constable’s famous statement of October 23, 1821 that: “It will be difficult to name a class of landscape in which the sky is not the key note, the standard of scale and the chief organ of sentiment.”

Taking a historical approach, the exhibition begins with depictions of the sky as the dominion of the divine, hence “the heavens”.

Stories of revelation, redemption and judgement from classical and Christian traditions are represented, including Dürer’s famous and minutely detailed engraving Nemesis and Rembrandt’s most celebrated landscape etching The Three Trees.

Another highlight is a striking renaissance Limoges enamel of the crucifixion with a backdrop of gilded cumulus clouds.

With the recognition of landscape as a distinct artistic genre during the 17th century and the emergence of meteorology as a scientific discipline in the late 18th century, the sky became a subject in its own right.

Yet the sky retained its capacity for heavenly symbolism and increasingly became a vehicle for emotional expression.

Clouds could suggest fleeting moments or magnificence, storms might embody threat or drama, while sunrises and sunsets could reflect death and renewal.

For the Victorian writer and artist John Ruskin, meteorological accuracy in art was a means of revealing spiritual truths and the exhibition includes two of his vividly coloured watercolours of the dawn.

Ruskin described making such works as “bottling skies” in the same way that his father, a prosperous sherry merchant, preserved vintages.

The spiritual and emotive aspect of skies persisted in the work of the 20th century British artists Paul Nash and John Piper.

Piper, who lived in Fawley Bottom and died in 1992 aged 88, now has a gallery at the museum dedicated to his work.

Commissioned by the then Queen Elizabeth in 1941 to make a series of topographical records of Windsor Castle, Piper’s stormy skies over the royal residence represented the imminent threat of the Luftwaffe and the Second World War.

However, this sombre symbolism was ignored or deplored by George VI, who quipped: “You seem to have very bad luck with your weather, Mr Piper.”

Jon O’Donoghue, the River & Rowing Museum’s head of public engagement, said: “It is going to be fascinating to look into artists’ use of the sky throughout such a long time period. The sky belongs to us all and yet how much time do we really spend looking at it? I hope this new exhibition will take us to the blues, clouds, stars and storms as we all reflect on our relationship with what looms above.”

For more information and to book tickets, visit www.rrm.co.uk