‘My paintings are kiss of death for buildings’ 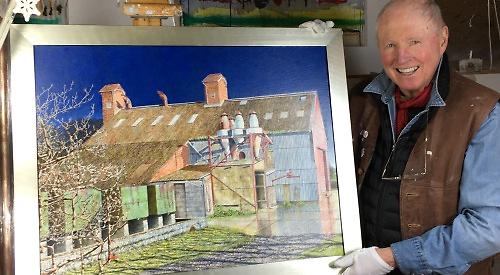 Watlington artist JAMES KELSO is renowned for his paintings of local landmarks. But over the years he has noticed that his paintings of buildings are often followed shortly afterwards by their demolition. Here he
confesses to being something of a one-man wrecking ball

THE old granary depicted in my recent painting, The Treasure of Britwell Salome — Vespers, is no more.

Its demise was inevitable, expected, and understandable.

Nothing stays still for long. The world moves on.

The same fate has befallen many of my subjects, sadly.

The building was gargantuan, a cathedral of power. I loved it. You could drive a double-decker London bus around the rim of the chimney, it was that big.

This was the Sixties. The building was being taken out of service and demolished.

I knew the decommissioning foreman and he gave me the run of the place. Very heaven. I drew and painted it endlessly during its demise.

The front of our block, Lords View, overlooked the famous cricket ground. We were at the back on the ninth floor.

The more I heard cricket commentators occasionally sneer at the so-called “eyesore”, the more I admired it.

There were two reasons for my attraction to industrial architecture.

The first was that the places tended to be quiet and often deserted. You could paint uninterrupted.

The second was that they were more interesting than domestic buildings. Their form followed their function.

Ask a child to draw a house. It will be not so different from the output of highly paid housing developers. Outrageous. In fact, Outrage by Ian Nairn was one of my favourite books on architecture.

Not everything was bulldozed. Sir Giles Gilbert Scott’s Bankside Power Station was saved by the skin of its teeth and became Tate Modern. (A wit once said they left the rubbish inside!)

People turn out in droves to watch them being destroyed, like public executions of olden times. I’ve attended several and they’re huge fun, provided you’re upwind.

Of course, demolition is not the only way to inflict ruin. The opposite can do the same.

The pleasant Thames-side hamlet of Benson has recently been engulfed by development. I don’t envisage that in 50 years’ time there will be coach tours to admire its traditional English charm. Nearby Chalgrove is threatened with a similar fate, with 3,000 homes to be built on the airfield site of Martin Baker, the famous ejector seat manufacturer.

If I were in charge, I would allow the development. Then, when every house was sold and full, I’d pull a lever and simultaneously eject all residents. Crowds would turn out to watch that, I’m thinking.

But folk must live somewhere, I hear you say. I can’t disagree. But I do know that, with the exercise of imagination, alternative and superior solutions could be found.

There was a third reason to paint industrial architecture. It wasn’t just that I was London born and bred, near Lots Road, Chelsea, so power stations were “in my blood like holy wine.”

It is a matter of aesthetics. What’s that Japanese world view based on the acceptance of transience and imperfection?

Wabi-sabi, yes, that’s it — the capacity to appreciate beauty that is imperfect, impermanent, and incomplete.

Put like that it sounds a pretentious way of thinking back on all those cold, grey days standing alone on the wastelands of derelict factories, canal banks and railway sidings, when I was younger and indescribably happy.

In fact, looking back, all this happened without my really noticing it.

The sequence was as follows: along I’d come, out came my easel, along came the wreckers.

It wasn’t meant to be like that. It just happened, down the decades, that that was the way of it.

So if you see me standing outside your dwelling, pencil in hand, my advice is to check your insurance.