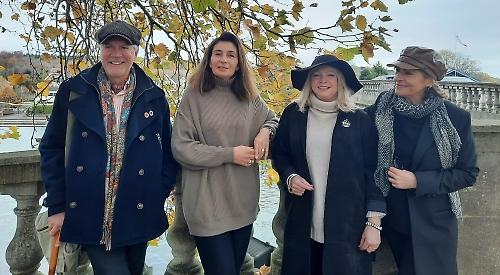 AN oil painter who describes himself as being “drawn towards beauty” is exhibiting his latest artworks at Henley’s Old Fire Station Gallery.

Andy Marlow last had a show at the Upper Market Place exhibition space in September last year, when he was joined by three other artists.

This time he is exhibiting alongside abstract painter Biddy Hodgkinson, with whom he shares an agent, and Jenny Leslau and Narelle Lester-Paine of online antique furniture and décor store The Juniper Barn.

Andy, who lives in Witheridge Hill, said: “Biddy trained at Chelsea College of Arts and she’s very much into colour and eastern philosophy. She has exhibited internationally and is a very well-established artist.

“Earlier this year, just by chance, she moved out of London and decided to move to Watlington, which she loves.

“I had been following her on Instagram and she just phoned me up one day and said, ‘Hi, it’s Biddy, want to go for coffee?’

“We’ve become very good friends and obviously I love her art, so one day I said to her, ‘I’ve booked the Old Fire Station Gallery, do you want to be a part of it?’ And she said yes.

“Something she suggested, which I think is a good idea, is we’re going to hang our paintings together, as opposed to all me and all her.

“We’re going to let them work together because although our styles are wildly different, colour-wise it’s surprising.

“It’s quite obvious which paintings are mine and which are Biddy’s but we think they might sit nicely together.”

As well as being a visual artist, Andy is a classically trained musician who studied guitar at the Royal Academy of Music.

Shortly after leaving, he was invited to join the English Guitar Quartet and has toured and recorded with the group for many years.

He said: “I’ve always been in the musical world. I do a bit of teaching as well as the performing and the art has just been running alongside. I’m professional in as much as I sell paintings, but it’s not my profession.”

Andy describes his style of painting as “impressionist with semi-abstract elements.”

He said: “I’ve always loved the impressionist masters like Degas, Renoir, Pissarro, Monet, Manet — all those sorts of people.

“For the last year or so I seem to have been drawn towards Provence and a lot of Parisian paintings. I don’t know why, I just have been, so we’ll see how that goes down.”

Despite not having been able to physically travel as much as usual over the past two years, Andy resists the suggestion that his French turn represents a form of interior journeying.

He said: “I think I’ve been drawn towards beauty, and certainly I hope the paintings are, but what I’m trying to put across in the paintings is something that we haven’t been able to be part of — so it’s all the lovely lavender fields in Provence and I’ve done quite a few paintings about it.

“I find myself drawn towards beauty in a sort of romantic way, I suppose. It’s not because I’m longing to be there but maybe it’s something to do with the fact that it’s untouchable to some extent. I know it’s becoming touchable again now but it certainly wasn’t for a while, for everybody.

“If any of this is true, it’s all subconscious — it’s a sort of escapism, I assume, but that’s what a lot of art is.”

He adds: “The process of me deciding what to paint next just seems to evolve — I don’t give it a great deal of thought — and then the paintings themselves in style and technique are quite quick anyway. It’s not like I’m spending weeks and weeks on a painting — it’s days for me, if that.”

Andy says that while the exhibition, which opened yesterday (Thursday) doesn’t have a title, the involvement of The Juniper Barn echoes the French theme already present in his work.

He said: “Jenny and Narelle have been friends for 30 years, having worked together in London. They set up The Juniper Barn simply as a result of their shared love of antiques and decorative pieces, particularly from France. Almost all of my paintings are French or French-inspired, so it’s just quite a nice tie-in.”

• The exhibition is running until Tuesday (December 14). Opening times are 10am to 4pm daily and entry is free. For more information, visit www.andymarlowart.com