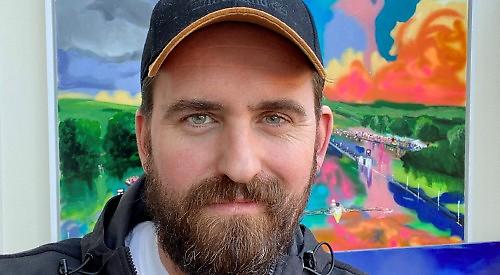 A ROWING veteran turned artist is about to stage his first solo art exhibition.

Nick Quirke, who was in the Leander men’s eight that won the Thames Challenge Cup at Henley Royal Regatta in 2002, paints colourful and spectacular skyscapes.

He will be showing some of them for the first time at the Old Fire Station Gallery in Henley next month and visitors will have the opportunity to meet the man himself.

Nick, 40, who lives in South Gloucestershire, has always had a passion for art.

When he was in his late teens he was at Shiplake College and rowed for Leander Club in Henley before attending art college in London.

He graduated from Spike Island arts centre in Bristol in 2006 with a diploma in fine art before going on to study sport science at Hartpury University in Gloucestershire in 2011. He spent 15 years as director of rowing at the University of the West of England in Bristol until early last year.

Nick says: “The love for my abstract skies has come from spending so long coaching and rowing outside on the water.

“Everything that I’ve been able to paint in this last year has been from memories from 25 years. I’ve got lots of different ideas that at some point I’d like to try to get down on canvas.” During lockdown he started to paint “properly” and found his work suddenly in demand.

He says: “Like a lot of people who evaluated what they were doing, it was a change that I was crying out for. I basically started again because I had time at home to do it and it really took off.

“I had done a few commissions for people’s weddings and things like that but nothing on the same scale.”

He calls his painting style “a mixture of abstract and impressionism”, adding: “Somewhere in the middle would be where my art is — Quirkeism, or something.”

Nick uses different mediums depending on the colours he is using to create mood-filled skies.

“The very neon, bright pink, blue and yellow,” he says, “I keep those really bright, punchy colours in certain areas of a painting.

“I tend to use acrylic and over the top of that I use oil paint. For the more traditional paintings, I just use oil. Some of the bigger commissioned pieces that I’ve done recently have also been a kind of a graffiti style with spray paint, then acrylic and then oil.”

Nick has been invited to put together a mini exhibition at Leander, which already has some of his paintings, on Thursday (January 27), which will be an open event.

His work is becoming sought-after and some cards he made for the club recently sold out in a week.

Nick is also in talks with Henley Royal Regatta about exhibiting prints at the event this year.

“I’m just chuffed that people can see what I see when I paint these paintings,” he says.

Recent commissions include three works for the Hilton Hotel in Abingdon, which is being refurbished. Nick has also created artwork for the Warburtons bread family and Team GB rowers Rick Dunn and Josh Bugajski.

Another commission came fron the mother of supermodel Rosie Huntington-Whiteley.

“I did a painting of their favourite place to walk their dogs,” says Nick.

American company iCanvas.com has taken 25 of Nick’s prints to distribute worldwide and he has a waiting list of around 20 people.

When he isn’t painting, Nick is busy being father to Gracie, four, and Maisie, two.

“Gracie’s always drawing and painting and Maisie just spends her time trying to ruin those pictures,” he laughs.

• Nick Quirke’s solo art exhibition is at the Old Fire Station Gallery, 52 Market Place, Henley RG9 2AG, from Thursday to Monday, February 3 to 7, from 11am to 5pm daily. For more information, visit www.nickquirke.co.uk