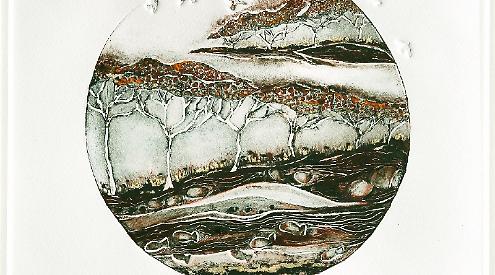 ART and home decoration can be sustainable and complementary.

That’s the view of five artists and an interior designer who will be exhibiting at the Old Fire Station Gallery in Henley from next week.

Kim works in the field of textured, hand-pulled printing, creating unique collagraphs. She has developed her own way of printing using layered plates, imaginative blind embossing and complex ways of mounting and finishing her images.

She has worked with many interior designers and says: “I can do a colourway to work with a palette, so they would give me a swatch of the cushion covers, or the grey of a wallpaper, and I could tone it into the artwork.”

Her works are influenced by our interaction with the planet. “Everything is to do with that energy flow and the trace of the energy that is left, like my new range, the Land Traces,” says Kim.

“It’s the whispers of the flow of the seasons, so you’ve got what’s on the surface, which is classic trees or foliage, then, it’s more what’s going on below within the core of the energy flow of Earth.

“My imagery is swirls, where the energy flows in great big spirals. I did a lot of blind embossing work in the artwork.”

Sarah Maidment has more than 30 years’ experience as an interior designer, working with wedding styling, furniture upcycling and bespoke headboards. The headboard designs are named after places that mean a lot to her, the Abbotsbury, the Chepstow, the Swinsty and the Henley.

Sarah, who lived in Wargrave as a child, will be giving two presentations at the gallery. The first, called Where to start?, next Saturday (March 19) is for those who want to tackle a room in their house but feel overwhelmed.

Sarah says: “Sometimes they look through magazines and there’s just too much choice, they don’t know what they want. This is just to guide them through the initial ideas.” For the second talk, called Sustainable Homes, a week later, she will demonstrate upcycling. “It’s a curated home really, to get people’s personalities in it,” says Sarah. “You want their soul in their home and then they’ll be happy.”

So what will she be demonstrating? Sarah says: “One is going to be a lamp base that you’re going to chuck out because it doesn’t go anywhere. You can paint it or do different effects, or you can make different lampshades from remnants of fabrics left over from the room.”

Sarah will also be taking a trip down memory lane, displaying a Henley Royal Regatta programme from 1962. It cost two shillings and has marks where her father charted the results.

She says: “We used to get the train from Wargrave into Henley and go and play in the play park by the river.”

She also remembers a toy shop near Market Place: “I got this little nurse with a baby from that shop and I bought a hobbyhorse — just happy memories.”