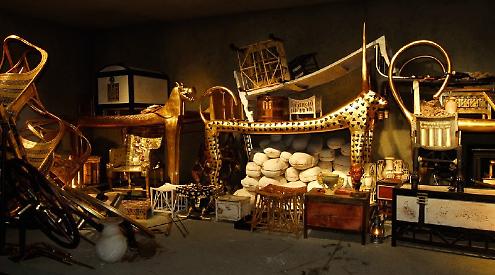 ON a spring day more than 3,000 years ago, Tutankhamun, the
19-year-old king of Egypt, was buried in Luxor in the southern part of his kingdom.

Robbers broke into the tomb soon afterwards but it remained both largely intact and completely lost to history until 1922.

The news of the finding of Tutankhamun’s tomb by a British group led by Howard Carter was a bombshell.

The surprise of the discovery, the splendid completeness of the funerary objects, and the supposed “curse”, all helped to fuel the craze known as Tutmania. A new exhibition at Oxford’s Bodleian Library, drawn from a wealth of material in the Griffith Institute, Oxford’s centre for Egyptology, marks the centenary of perhaps the most famous and glamorous archaeological find of all time by Carter and his sponsor, the Earl of Carnarvon.

This exhibition includes maps, diaries, letters, drawings and photographs which chronicle the discovery and recording of the more than 5,000 objects from the four chambers making up the burial site. Their state of preservation was remarkable. On Tutankhamun’s face mask was a garland of cornflowers and olive leaves which had survived more than three millennia in the dry underground air.

Similarly, a “heap of large white curious oviform boxes” was found to contain joints of meat while a linen scarf still draped the neck of an effigy of the jackal god Anubis. Tutmania swept the world, assisted by Carter’s flair for publicity and the sinister thrill attaching to the idea that the tomb — or at least the opening of it — might be cursed.

True, Lord Carnavon died a few months afterwards but from sepsis produced by an infected mosquito bite and not because he had disturbed the dead. The opening of the tomb coincided with the beginning of Egypt’s independence and the dead king became the proud symbol of a new, living nation.

In the past, some of the found objects would have become the “property” of Carter’s team but new rules — and a sense of fair play — meant that everything from the tomb was retained in Cairo where it is still on display.

This fascinating exhibition, curated by Professor Richard Bruce Parkinson and Dr Daniela Rosenow, focuses on the Egyptian participants in the discovery who have until recently been overlooked and who are often nameless. Prominently placed are photographs of an Egyptian boy, probably of around Tutankhamun’s age, wearing a jewelled necklace from the tomb.

Though his name is famous throughout the world, Tutankhamun remains a mystery. No one knows the cause of his death, though it seems to have been premature and unexpected.

There are signs that his burial was arranged in a hurry. One of the most human and revealing is that the gilded foot of the coffin had to be cut away as it was too big to fit inside the lid of the sarcophagus enclosing it.

Just as human and revealing is an item from 3,000 years later.

Howard Carter’s diary is open at the day of discovery and a single line “First steps of tomb found” rises up the page.