Music and art brought us close in lockdown 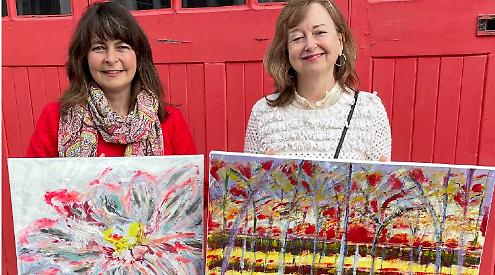 TWO artists who became friends during the coronavirus lockdown are to showcase their artworks at a joint exhibition in Henley next month.

Cathy Burke, from Harpsden, and Jacqueline Burrage, from Kingwood Common, share a passion for music.

They were put in touch a year ago by a mutual friend, Henley violin teacher Anna del Nevo, who taught not only Jacqueline but also Cathy’s two sons, Barnaby, 11, and nine-year-old Edward.

She says: “I had never worked with acrylic before and I thought, ‘Ooh, I really fancy a go’.

“I went to one of her courses and she gives you a picture to copy. She takes you through it step by step but, unfortunately, because of the nature of who I am, I just went completely off-piste.

“When you’re at school, teachers can be slightly unkind and not realise the impact they’re having. I remember as a child thinking that I hadn’t got any artistic flair for painting but I stripped away all those memories.

“I was really free and I really enjoyed it — just putting paint on the canvas felt really liberating. It was amazing.”

Cathy, whose husband, Peter Scholes, works for Invesco, started painting at home and gradually friends started admiring her work and some even asked to buy her paintings.

She says: “I have sold quite a few already and people tend to like my art as it’s very eclectic.

“Something just has to pop into my head and then I create it from there. I think about colour and what it feels like and I normally have music playing as well and certain colours are influenced by music.”

Cathy, whose sons attend Westminster Abbey Choir School, had a career as a singer and actress prior to having her children and will be participating in community opera Dalia at Garsington in July along with her younger son.

She says: “Music’s very much part of us as a family.”

Cathy is excited to be sharing the exhibition with Jacqueline: “It has been a really nice creative process, actually.”

Jacqueline has been painting for many years but became more prolific during the pandemic.

She says: “We both had this idea about doing an exhibition and we got together to pool resources.” Jacqueline can pinpoint the exact time that she began to paint more as she had an extraordinary muse.

She explains: “I don’t know why but I started painting a lot more specifically after I had my first AstraZeneca vaccine.

“It was quite strange but I can date all my paintings back more or less to then. I’ve always painted but it just led to this explosion of creativity. I’m not sure if it’s a recorded side-effect, maybe it was the relief, I’ve no idea.

“Most of my paintings focus on Henley and the surrounding area and countryside. The Chilterns landscape was an important focus during lockdown as it was where we spent a lot of time as a family, partly because I love the countryside anyway, but also because everything else was shut.

“For us, just like a lot of families, the countryside around Henley played a central part in our lives.”

Jacqueline, who is married to Tim, also has a musical family. She plays violin in the Chiltern Edge Orchestra as well as playing piano.

Her daughter, Charlotte, is a trained artist and is currently studying for an art foundation diploma at Arts University Bournemouth. She also plays the harp and flute and sings.

Her son, George, is a professional musician who plays double bass, electric bass, keyboards and violin with jazz bands and ensembles in Manchester. Jacqueline says: “Music is a big part of both Cathy’s and my family and I think this is the connection between us and the link between sound and colour in our work.

“Playing with a full orchestra is very exciting. When I first went, I couldn’t participate very much but it really pushes you on an awful lot.

“You’re playing with other people and looking at lots of different repertoires but if you’ve got a concert coming up you think, ‘Oh, god’ — it gives you a purpose to practise.”

Both artists are to donate the profits from the show to charities. Cathy will be donating to the Friends of Kipkelion, a UK charity which was set up by a colleague of her husband’s.

Kipkelion is a rural area in Kenya’s Rift Valley province, north-west of Nairobi. The charity aims to provide safe drinking water for schools and rural communities, ensuring that schools are safe, hygienic places where children, especially girls, can learn.

Jacqueline will be giving her profits to the Riverside Counselling Service, a Henley charity which offers professional, affordable counselling to adults and young people.

• Life in Colour will be at the Old Fire Station Gallery in Upper Market Place, Henley, from Thursday, June 9 to Tuesday, June 14, from 10am to 5pm daily.