Sculpture in the garden returns to Greys Court 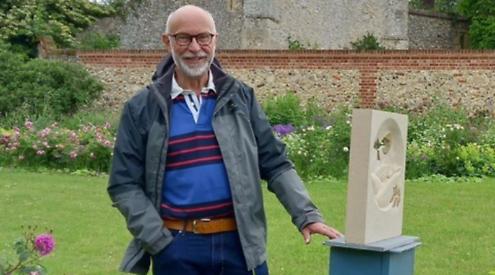 SCULPTURE in the Gardens returns to Greys Court this month and will run for five weeks.

More than 30 artists from the Oxford Sculptors Group will be exhibiting about 160 bronze, stone, steel, wood, glass and ceramic pieces in and around the National Trust property near Rotherfield Greys.

All the sculptures will be available to buy and they can be delivered or collected after the exhibition.

This is the fifth year of the exhibition, which has grown in popularity.

Keith Appleby, who chairs the steering group, says: “The exhibition has become a tradition. I think the first year it was three weeks and we gradually increased it to five.

“It’s a mixture of sculptures placed throughout the garden and a number of sculptures in the Cromwellian, which is the building just as you go into the walled garden.

“We have a really good relationship with Greys Court as we both benefit.”

Keith, who lived in Cornwall for 40 years until he moved to Sonning Common six year ago, uses woodturning to create delicate sculptures and hollowed forms.

He is fascinated by the patterns and shapes to be found in wood and uses different types with his favourites being yew and ash that is spalted, which means it has been stained by fungi.

Keith says: “When ash is lying in the forest, the moisture in the wood attracts fungus and you get these black lines that appear in the wood and create a really fascinating pattern.

“I also like things like burrs, or cankers, that form on the surface of a tree. Oak and walnut burrs produce fascinating patterns.

“The piece is turned to a point where the wood is quite thin, about 5mm in thickness and then I start carving out the shapes.

“My stock phrase is ‘anything that is quite ugly and maybe a bit nasty’, maybe with bits that have rotted away. I really love attacking stuff like that because it produces great results.

“You respond to the shapes and the patterns that you discover as you’re going along but sometimes you have to avoid them as they might produce a weakness.

“Anyone who works as a woodturner, superglue is their saviour. If you get splits and cracks, which often occur as wood dries out naturally, superglue fills them. It produces a really solid line within the wood and binds it together.

“I’ve just done one where I was working on it when the wood started to fracture because there was a weakness in it. I had to build it up with resin to imitate the wood itself. I defy people to work out where it is on the piece.”

John Nicholls, from Caversham, carves his creations out of stone, his favourite being Hopton Wood, a type of limestone from Derbyshire.

“It is very fine and particularly suited to carving so is popular for tombstones. It’s about the best carving stone in the world,” he says. “It takes a lovely polish and a nice, crisp edge. It’s lovely stuff but it’s difficult to get hold of.”

He also works with Ancaster stone, from Lincolnshire, and occasionally with soapstone. He also carves in relief on pieces of slate.

John’s work is led by the heart. He says: “When people ask what it represents, I say, ‘Have you got a favourite piece of orchestral music?’ and they tell me. I say, ‘Well, what does that represent?’

“It’s purely abstract. I do things that please me and if they appeal to other people, that’s wonderful.”

At last year’s exhibition, John showed a piece called Chilternscape and this year, he has developed on the theme.

“It was a Chiltern landscape with a red kite cut out in silhouette,” he says. “I’m doing something similar this year called Chiltern Triptych, which is a three-part thing with a red kite, some beech leaves in slate and then in the middle a sort of cut-out scene.

“Chilternscape was very popular and I made three of those in the end. You cut away the stone and that leaves the image standing proud. It’s a bit fissile so bits tend to ping off and you have to be a bit careful.” Martin Lorenz, from Wargrave, will be exhibiting a head portrait of artist Simon Allison as an example of his work. He made it during a class run by Allison’s wife, artist Jane Hamilton, at the Phoenix Studio in Towersey, near Thame.

“[It’s] basically to tell people, ‘Look, if you want to commission a portrait, come to me,” he says.

Martin, 90, has also been commissioned to do animal sculptures after being asked, “Do you do dogs?” The result was “dog 1”, a model of a Labrador called Harvey.

He was then asked by a relative if he could create a dog portrait for a neighbour who had looked after her when she was unwell, leading to “dog 2”, a cockapoo called Merlin.

Another request led to Shaggy Dog but that won’t be on display at Greys Court.

Another of Martin’s pieces is called Bluecoat Boy and was created for Reading Blue Coat School in Sonning. “It’s a tiny little thing which they used to give away as prizes,” he says.

He also made some religious pieces for the Shrine Shop in Walsingham, Norfolk, including Our Lady of Paddington and Our Lady of Westminster.

Roz Read, from Langley in Buckinghamshire, creates large pieces in clay before having them cast.

She says: “I like working with colour and try to get it in somehow. I’ve started doing more work in Jesmonite [a composite] as it’s less toxic and you can create a very similar look to bronze resin.”

She has taken part in the exhibition every year and says Greys Court is an ideal venue.

Roz says: “I’ve done the layout every year. I really enjoy it, although it is a lot of work and it’s very chaotic on the day. We have to go in early before the general public come in. It’s great to see it all come together and to see other people’s work.”

• Sculpture in the Gardens is at Greys Court from Saturday, June 11 to Sunday, July 17 from 10am to 5pm. There are also three ticketed events on Thursdays, June 16, 23 and 30 from 5.30pm to 8pm for £15 per person. For more information, visit nationaltrust.org.uk/greys-court or www.oxfordsculptors.org