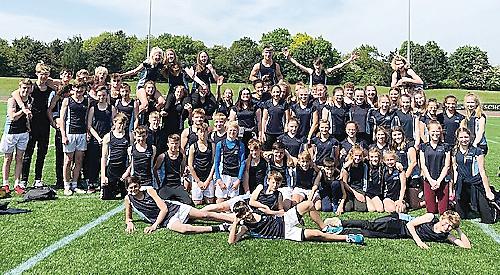 Up against pupils from Chiltern Edge, Langtree, Icknield, The Oratory, Wallingford, Didcot Girls, Wheatley Park, Cranford House and St Birinus, 70 Gillotts pupils came away with a number of wins and top three finishes.

In year seven Sienna Wright finished first in the 100m, 200m and long jump and then was part of the winning relay team.

Georgina Ashby (year eight) came second in the 100m and long jump while Daisy Weiser (year nine) put in another good performance taking first place in the 100m, 200m, long jump and again was part of the winning year eight/nine relay team. The year 10/11 girls’ relay team also swept aside the competition for a comfortable win. Lulu Broadbent and Becky Barry were in the top 100m and 200m places with Broadbent also taking first place in the long jump. Katie Knight was second in the 300m while Poppy Priestly won the shot put with Freya Meeks second and Morgan Hanson second in the 800m. For the boys there were strong performances from Gabriel Gierczyk and Sergej Vujosevic in the shot put, Gierczyk also taking second in the discus as did Sonny Martin in the 100m and 200m. The year eight/nine boys’ relay team were second while the year 10/11 boys third. Winning athletes have been invited to compete in the Oxfordshire county trials later this month.