You’re never too old to run 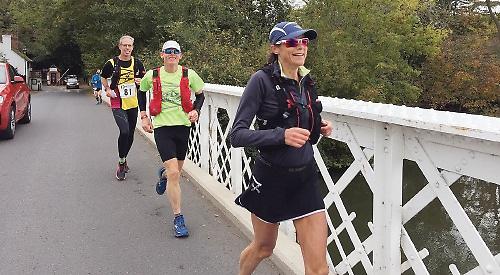 TWO veteran runners who completed a race from Oxford to Henley in less than seven hours say they want to inspire older people to stay fit and active.

Anna Troup, 48, and Richard Staite, 49, of Lambridge Wood Road, Henley, ran the Thames Trot, a 50-mile trail race along the Thames Path, on Saturday in a time of six hours and 53 minutes.

They finished fifth overall out of more than 300 people who started the challenge in Iffley and were first in the over-45s category.

Mrs Troup was the second woman to cross the finish line in Mill Meadows while her partner was the fourth man home, having run the Abingdon Marathon only six days earlier.

The winning man and woman were aged 26 and 30 respectively.

Mrs Troup said: “I am approaching 49 and Richard is approaching 50 but despite what are very large age gaps between us and the winners, we managed to hold our own.

“We had an average per mile pace of eight minutes and 38 seconds along the length of the course and we completed the first marathon in three hours and 43 minutes, which would be good enough to qualify for a ‘good for your age’ spot in the London Marathon.

“This was despite being slowed down by mud, gates and hills. There was also just under 300m of elevation gain, mostly in the Whitchurch Hill area, and we still had more than three hours of running to do.”

The couple train six days a week, running various distances, and take part in about 10 races a year in the UK and abroad.

In August they completed the Ultra-Trail du Mont-Blanc, an ultramarathon of about 17km and a total elevation gain of around 10,040m. In September Mrs Troup was the first woman in the Thames Path Challenge, a 100km endurance race along the river from Putney Bridge to Henley.

Mrs Troup, who is chairman of the Oxford University Women’s Boat Club, says off-road racing is a great way for older people to keep fit as they can go at their own pace.

She said: “With these races there are a lot of people who walk as well as run and some use poles to help them along.

“They are incredibly friendly — there is a sense of real looking after each other. It is a very social and it is very easy for older people to get into it.

“Increasingly, research is highlighting that older people should continue to exercise rather than succumbing to going slowly and steadily to take account of age.

“The research shows that for older athletes that while age does take its toll and there is some slowing every year, we can still perform well into our veteran years.”

Mr Staite, who works in pensions and is a property developer, said: “As one gets older and past 50, doing exercise has real benefits but the terrain is important because you have to consider the impact on your joints.”

Mrs Troup added: “We think it would be great, given the profile of so many Henley resident athletes, many ex-rowers and excellent veterans, to encourage older people by showing what can be achieved.”