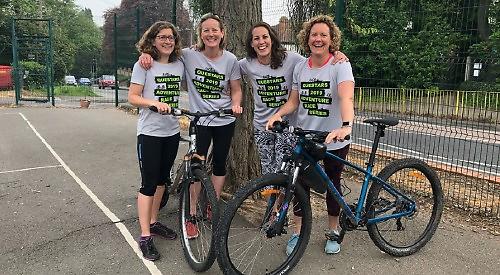 FOUR women from Wargrave raised about £400 for cancer charities and won a triathlon competition at the same time.

It was part of a series of events they are taking part in this year to raise money for Women V Cancer, a campaign which supports three charities, Breast Cancer Care, Ovarian Cancer Action and Jo’s Cervical
Cancer Trust.

The Wildcats were among 14 teams taking part in the novice ladies’ category. They took almost five hours to run 15km, cycle 32km and kayak around a lake on the course. They finished well clear of the second-placed team and were 35th out of 87 teams in the overall novice category.

Mrs Hall, 47, who lives in Blakes Road with her husband Jonny and their four daughters, said: “We all do triathlons and run and cycle regularly and we try to do something like this every year. Previously Jo, Emily and I have done the Hell Runner in Hampshire and we were trying to find another fun race to do. We were recommended this one by a friend so we entered and started training.

“Victoria was a late entry — she only joined just a few days before and had done hardly any training.”

The women were given a map of the course and cycled to the lake, where they then got into kayaks before cycling and running back.

They were given five hours to go as far as they could over the three disciplines and arrived at the finish line two minutes before the 5pm deadline, meaning they didn’t incur any deductions.

The Wildcats didn’t know they had won their category at first and had gone back home before they were told.

Mrs Hall said: “When you get to the finish line you don’t know you’ve won because people are finishing at different times. We didn’t stay for the prize-giving — we went straight home and were discussing how we could do it better next time.

“We only found out that evening when my husband texted me and went for a celebratory drink at the St George and Dragon.

“It’s a brilliant event. I’d highly recommend it and we’ll definitely be doing others.”

The women, who met via their children’s school, plan to hold fund-raising events over the summer, including a coffee morning, and they will enter the Wargrave Sprint Triathlon in June, which Mrs Hall organises.

Two singalong screenings of Mamma Mia! Here We Go Again will be held at the Robert Piggott Junior School in School Hill tomorrow (Saturday). The first, at 4pm, will be for seven- to 10-year-olds, while the other is for 11-year-olds and over and will be shown at 7pm.

In October, Mrs Hall and Mrs Harris will cycle from Milan to Venice, a journey of about 165 miles, and they have to raise £1,600 by July.

Mrs Hall said: “I’ve got friends who have had breast cancer and the cycle ride supports that charity, so it’s a very good cause.

“I also used to live in that particular stretch of Italy so it will be great to go back. Victoria will be joining in with the fund-raising.”