Runners raise money for family of PC killed on duty 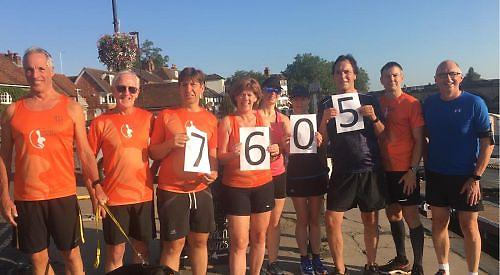 A GROUP of runners from Henley took part in a run to raise money for a police officer who was killed while on duty.

Pc Andrew Harper, a former student at The Henley College, died while responding to an incident in Sulhamstead on August 15.

Nine members of the Henley Hares running group took part in a run in his memory on the August bank holiday. They ran along the river to Shiplake and returned through Harpsden Woods.

They were among hundreds of runners across the country doing the same. Two police constables based in Bingley, West Yorkshire, set up the challenge for people to run, walk, cycle or jog a total of 7.605km because Pc Harper’s shoulder number was 7605.

Runners paid an entry fee for taking part and the £25,000 raised overall will be donated to the officer’s family, as well as Care of Police Survivors (COPS), a national charity supporting families of police officers who have lost their lives while on duty.

Pc Harper had married his wife Lissie, whom he met at the college, only weeks before his death. A man has been charged with murder.