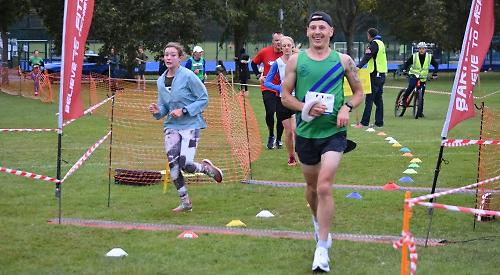 MORE than 250 people took part in the Sonning 10km and 5km race on Sunday.

This was one of the few such events to be held this year.

The runners started and finished at the Berkshire County Sports Club, off Sonning Lane, and were held in pens before being set off in waves of six every 30 seconds based on their predicted finish times.

The second annual event was due to be held in May but was postponed because of covid-19. It was rescheduled with approval from Wokingham Borough Council and Thames Valley Police.

A planned children’s fun run did not take place after the organisers were advised that having large numbers of children accompanied by their parents and supporters was too risky.

The runners followed a route along Sonning Lane towards the village and on to the Thames Path, then made their way up a hill through the grounds of Reading Blue Coat School before rejoining Sonning Lane. After turning left on to Bath Road, they took a left on to Pound Lane and headed back to the sports club.

Runners in the 5km race completed one circuit while the 10km runners did two. They were all required to maintain social distancing whenever possible during the event, except when overtaking.

Stephen Ridley, 35, a member of Reading Roadrunners, was the fastest finisher in the 10km race in a time of 33 minutes 57 seconds.

He said: “It was really well organised and felt really safe from a covid perspective. The way they started us off worked perfectly and spacing us all out makes for faster running. It was brilliant to be able to get back out and do competitive running with other people.”

Mr Bartlett said: “It was really well organised and marshalled with lots of people shouting encouragement as we went round.

“We haven’t been to a big event like this since lockdown, so to have that community spirit again and to see people smiling is great.”

Colin Lovern, 51, and Stewart Hackman, 50, from Sonning Common, had not raced competitively since February. Mr Lovern said: “It’s great to be back out. They organised it really well and it felt nice and safe. I thought the holding pens were a great idea.”

Mr Hackman added: “It was actually better than a normal mass start because you’re not trying to jog around people. It wasn’t congested at all.”

Aisling Byrne-Hansen, 27, from Emmer Green, ran with a group of friends and achieved a personal best time of 49 minutes 19 seconds.

She said: “I’m so happy. It makes the early start on a Sunday a bit more worthwhile. It has been something to work towards because lots of other races have been cancelled.

“They have organised this so well, everything was so smooth considering covid is everywhere and on people’s agendas. This has just been so easy and well organised, which makes the whole experience more fun.”

Steve Horn, 50, from Caversham, who came home in 43 minutes and 52 seconds, praised the organisers for keeping runners updated prior to the event as well as for the way it was run on the day.

Chris Moseley, 41, of Wargrave Runners, said: “It’s nice to be out running in an actual race again. It didn’t feel congested. It was safe and good running.” Sisters Miranda Elsome, 42, from Crays Pond, and Sarah Hollitzer, 45, from Fawley, near Wantage, ran together.

Mrs Elsome said: “It’s our only race this year and I think it worked really well.”

Ellie Barnes, whose company, Barnes Fitness, organises the event, said it was important that everyone had enough space to feel safe and still part of the event.

She added: “A lot of events have been cancelled or made virtual but I think this just proves that it can be done in real life. People just need to be sensible and follow the advice.

“However, I completely understand it’s not for everyone to come to a real life event at the moment.”

Mrs Barnes thanked St Andrew’s Church in Sonning for allowing the runners to go through its grounds.

There were no trophy presentations and the finishers’ medals, which had been sanitised, were left on a table for runners to collect. Spectators had been discouraged from attending.

It is hoped that next year’s event will be held on Sunday, May 23 but this is a provisional date.