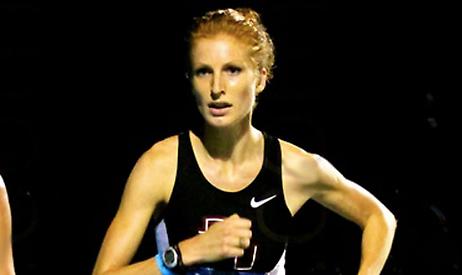 AN athlete from Medmenham set a new personal best at the Commonwealth Games in Glasgow.

Among the crowd were her parents Sally and Nigel, her older brother Tom and her coach Jan Nash, of Wycombe Phoenix Harriers.

Woolven, who turned 21 on Saturday, was reunited with them within minutes of finishing and they all hugged and congratulated her.

She said: It was an absolutely incredible evening  Ive never experienced anything like it before.

The atmosphere was just unbelievable and I was amazed at the level of support for the English athletes. It was overwhelming and emotional but really, really exciting.

The race was fairly consistent for me. I was comfortable with my pace  it was nice and relaxed and I didnt have too much trouble.

I had a nice relaxing summer, I kept up my training at home and the support from the crowd helped me make that final push.

I couldnt have done it without Jans help over the summer and the support of my family so Im very grateful to all of them.

Woolven is currently studying at Florida State University and will fly back on August 10. She will represent the university during its cross-country season and hopes to eventually reach Olympic standard.

The Christmas Common athlete, who had qualified from heat two after finishing runner up earlier in the day, finished eighth.

His time of 13.84 seconds was 0.52 of a second behind Jamaican winner Andrew Riley.