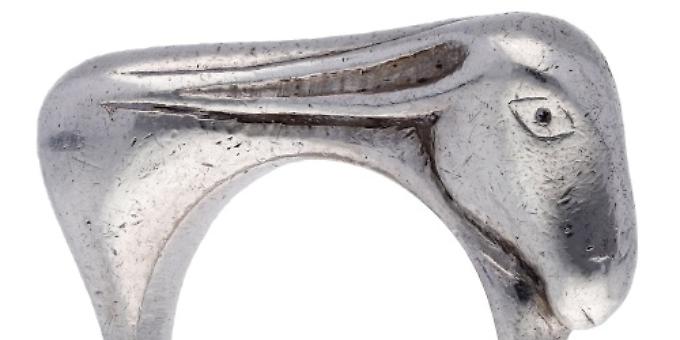 “ONE of the joys of working for an auction house,” says Frances Noble, head of the jewellery department at Mayfair auctioneers Dix Noonan Webb, “is not knowing what the next day will bring — will it be a Victorian diamond necklace, a medieval ring or a Cartier pendant? Or something completely different...”

An elderly client called into our offices recently for a valuation on a ring. Opening her purse, she pulled out a curious silver ring, of angular form, which on close inspection was modelled as a donkey, its long ears laid flat against its head, forming the top of the ring. It was not hallmarked or signed — and could perhaps have been just a novelty ring of minimal value. However, this was not the case.

“On seeing this curious ring,” continued Frances, “I was delighted to recognise the work of a sought-after designer, Mosheh Oved.”

A Polish-Jewish immigrant, Moshe Oved (1885-1958) came to London in around 1902. In 1938 he become the owner of a celebrated Bloomsbury antique shop, Cameo Corner, near the British Museum.

A charismatic and talented jeweller, sculptor and writer, Oved was an eccentric character, often to be seen dressed in long flowing purple velvet robes, entertaining his customers — who included Queen Mary — with stories and anecdotes.

According to one such tale, while sheltering in the basement of Cameo Corner during the Blitz, Oved first began modelling his animal rings, to steady his trembling hands.

His first ring was a lamb, perhaps a symbol of the ultimate sacrificial lamb, made from the silver of Oved’s own cufflinks, after he learnt that a client’s son had been killed in action.

Oved went on to make numerous anthropomorphic rings, mostly in silver, but some in gold, modelled as charming animals and birds and often displaying human characteristics.

These rings have now become extremely collectable and highly prized.

To return to our elderly client, she told the story of how as a young girl in the early Fifties, her father had given her money to buy a Christmas gift from Cameo Corner. She had chosen the little donkey ring, a charming and tactile piece, and had kept it ever since.

This delightful ring, estimated at £600-800, attracted considerable interest in a recent jewellery auction at Dix Noonan Webb, selling for more than double the estimate at £1,560. So check your jewellery drawer for similar treasures, they may be worth more than you thought...

• Dix Noonan Webb will be holding their next jewellery valuation day at Phyllis Court on Friday, September 27, between 10am and 4pm.

BROCKHURST and Marlston House preparatory schools are located near Hermitage and are delighted to ... [more]

A WARGRAVE man who had a terrifying near-death experience while on holiday in Majorca has written a ... [more]

“ONE of the joys of working for an auction house,” says Frances Noble, head of the jewellery ... [more]