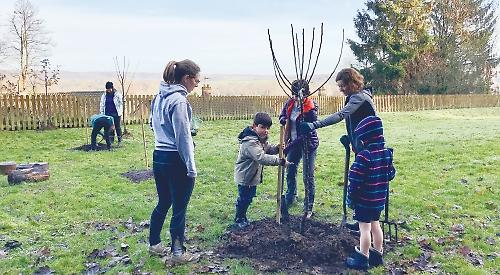 AN orchard has been created at Badgemore Primary School in Henley.

A group of about 20 parents and pupils planted 10 apple, pear, plum and greengage trees in the grounds of the school in Hop Gardens.

All but one of the trees were paid for by the School Lunch Company, of Oxford, which is the school’s caterer, and Henley in Bloom.

The other was donated by teacher Joanna Basher, who left the school last year. The trees are about two years old and will grow to a maximum of about 13ft. They are expected to bear fruit in two or three years’ time.

The volunteers also dug some raised beds, which will be planted with vegetables.

Governor Tuc Ahmad, who led the project, said: “It will be very exciting for the children to watch the trees grow and eventually harvest their own produce.”

The school has also planted a wooded area of about 200 beech, hazel and hawthorn trees and dug out 40 tonnes of soil to make way for a new wildlife pond.

Southern Plant Hire, of Station Road in Henley, loaned the school a digger for two days free of charge.

Mr Ahmad said: “We want our grounds to be as stimulating and interesting as possible while improving biodiversity and encouraging the children’s natural curiosity about wildlife.

“It will encourage them to consider the importance of the environment while offering new play opportunities, which ties in well with our status as a Forest school.”

Meanwhile, seven Badgemore teachers and parents are to go on a beekeeping course in preparation for the arrival of two hives later this year.

The training will be provided by the South Chilterns Beekeepers’ Association, which will also offer practical guidance.

It’s hoped that the school will be able to produce Badgemore honey to sell at community events.