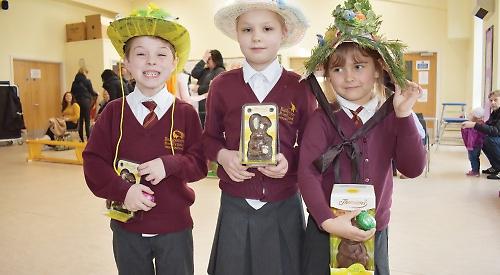 PUPILS at Badgemore Primary School in Henley took part in an Easter bonnet parade for their parents.

The children made their own hats using cotton wool, feathers and real foliage.

Henley Mayor Kellie Hinton awarded prizes of chocolate for the best three designs by James, Caitlin (Robertson) and Isla and every child received an Easter egg from the Mayor’s escort Councillor David Eggleton.

Cllr Hinton said: “It’s amazing how much effort has gone into making the bonnets. Some of them have intricate details and the children must have spent a considerable amount of time on them.”

Headteacher Marion Arnold added: “I’m amazed at the imagination and creativity shown. The children put in a huge amount of effort in their spare time.