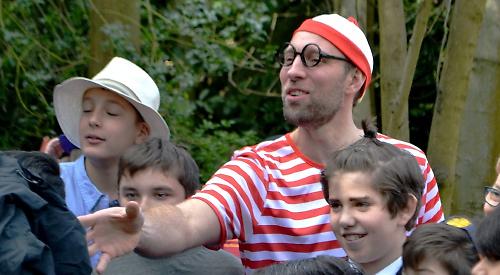 Headteacher Marion Arnold, who was dressed as a witch, informed pupils at lunchtime that there had been a “robbery” and she had caught the culprit.

Teacher Tracey Urwin, who was dressed in a stereotypical hooped top and flat cap with an eye mask, then produced a “swag” bag containing various items including a cut-out “gun” and a cuddly toy spider.

It also contained goods she had “stolen”, including a coat and pencil case belonging to teacher Tim Hoskins, who was dressed as Wally from the Where’s Wally? series.

Mrs Arnold then invited the pupils, who all wore fancy dress, to “cast a spell” against the robber in order to turn her good.

The youngsters wore a range of costumes including the Gruffalo, the Tiger Who Came To Tea, Harry Potter, Robin Hood and the Mad Hatter.

Throughout the day, they shared photos of themselves reading books in unusual situations including on horseback, on surfboards and while performing acrobatics.

They listened to stories read by staff and parents and took part in activities themed around “Dreams”, which is the theme of this year’s Henley Youth Festival.

As part of the annual festival’s school workshops, they made puppets and “dream machines” illustrating their dreams, which were inspired by the “dream jars” from Roald Dahl’s The BFG.

They also studied children’s poems on the theme of dreams and imagination and used computer software to make animations based on them.

Mrs Arnold said: “They absolutely loved it. As they came through the gates in the morning, they were so excited to be dressed up because it’s a fun break from their usual activities.

“It helps them to learn because they really take things in when they’re enjoying themselves and it encourages them not just to study books but truly appreciate and understand them.”