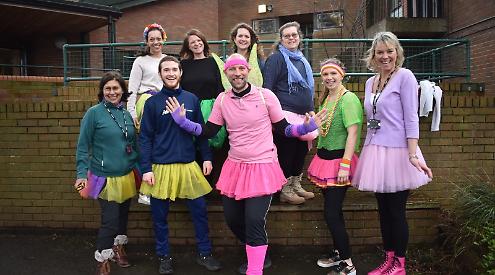 TEACHERS at Badgemore Primary School in Henley came to work dressed in tutus to thank pupils for raising £746 for “tutu day” on February 22 (22.02.22).

The children had baked cakes and cookies to sell, did sponsored runs and washed cars to raise money. One pupil swam 22 lengths, another wore a tutu while skiing during half term and another did jobs for 2p or 22p at his mother’s birthday party.

Ten per cent of the money raised will go to the Chiltern Centre in Henley, which supports young people with disabilities, while the rest will be used to support the school.

Headteacher Tim Hoskins (centre) said: “The parent teacher association originally asked if I’d be willing to wear a tutu if I they raised a certain amount of money.

“It was originally supposed to be just myself but we’ve got an amazing group of staff here who are up for a laugh so everyone decided to come in a tutu to celebrate what the children have raised.”