Henley bow out of national tournament 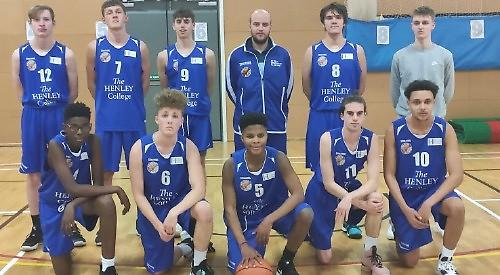 HENLEY COLLEGE’S run in the England Dynamik Schools U19 men’s competition came to an end as they were soundly beaten by a talented Richard Huish team in Taunton.

Having been hampered by multiple injuries, illnesses, and absences, the team travelled to the South West with only six fit players and Kai Hope who had been out of action for four weeks with an ankle injury but gave a good account of themselves as they departed the competition at the last 16 stage.

The game started on a fairly even keel until Huish hit the visitors with a 15-2 run to break open the game in the first quarter of play. Some good shooting from Adam Marzec, Hope and Ben Sher kept Henley in touch but a strong finish to the opening quarter ensured a 31-13 lead for the hosts.

The second quarter followed suit with Henley struggling to contend with Huish’s excellent transition and rebounding threat as the home team poured in another 30 points to Henley’s 15 with the hosts opening up a commanding 61-28 half-time lead.

Despite such a big deficit after 20 minutes, the visitors came out fighting and tried to work on the areas they had identified that needed to be better at the break but the home team were relentless and too strong for their opponents as they scored another 30 points to Henley’s 11 in their best quarter of the game.

The great thing about the Henley outfit is they never lie down and finished the final 10 minutes in much better fashion with Marzec and Sher leading the scoring charge supported by Leighton Richardson.

Thomas Job was good on the defensive end for his team after a four month lay-off as the visiting team narrowly lost the last quarter by 20 points to 15 but held their heads high as they exited the competition to a very well-rounded Huish side.

Sher led his team with 17 points, Richardson finished with 15 and Marzec had 11. Henley head coach Ben Fisher was proud of his team’s effort this season and was complementary of his side’s opponents. Fisher said: “We have had a great run in this competition and the development of the players has been very positive to see over the last six months. Today’s loss does not define us but it gives a fantastic opportunity to reflect and learn as to what is ahead at the next level. A lot of hard work has been done but even more lies ahead and knowing the nature of this team, they will be ready for this challenge.

“A lot of credit must go to Gary Carter and his team for the excellent job they did today but more so for the programme they have been building in Taunton for a while now. They are great friends of the Rockets programme and whilst it is always hard to lose in that fashion, we must say a huge well done to them on their victory today.

“My guys however have been a pleasure to coach this season and now it is time to improve the programme, work hard in the off-season, and get an eager, competitive group ready for next season.”

Henley College will now play a number of friendly games before the conclusion of the programme at Easter and any new potential students are most welcome to join the academy for a trial in the next few weeks. Anyone interested in joining should email coach Ben Fisher at ben.fisher@
readingrockets.co.uk