Kayaker attempts challenge for charity on his doorstep 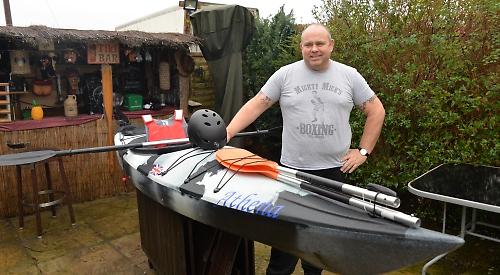 A MAN from Benson is to attempt to complete 100 miles in a kayak in five days for charity.

Ian Trust and his friend Mark Summers, who lives on a houseboat in Reading, hope to raise £5,000 for the Thames Valley Air Ambulance.

They will begin their challenge in August on the River Avon in Bath and paddle 87 miles along the Kennet and Avon Canal to Newbury and then the rest of the way along the River Kennet to Reading Rowing Club.

Mr Trust, 50, of Porthill Road, said: “I am quite confident and excited about it. I used to do a lot of kayaking, on and off, for about 30 years. I haven’t done any for about 10 years but it’s like riding a bike.

“I used to do mainly white water so this is different with the serenity. It’s the scenery more than anything else.

“There’s a section of about 20 locks in Devizes and I’m looking forward to negotiating that.”

He said his partner Sharon Phillips suggested raising money for the air ambulance as it’s based at RAF Benson. “It’s very local and a great cause,” said Mr Trust. “The charity says it costs approximately £2,500 per mission so if we can raise £5,000 we can potentially save two lives.”

He climbed Mount Kilimanjaro in Tanzania in aid of disability charity Scope 11 years ago and said he had been looking for a new challenge.

Mr Trust, a lorry driver, said: “I saw a programme on TV about a guy who was canoeing the Leeds and Liverpool Canal and I thought, ‘the Kennet and Avon’s much closer to me’. I mentioned it to Mark in passing and he said he’d be up for it.”

The pair will be supported on land by Paul Diment, from Reading, and will either camp each night or stay in a bed and breakfast.

They will begin training on Dorney Lake, near Eton, this weekend. Mr Trust said: “We have already done plenty of gym and bike work.”

To make a donation, visit www.justgiving.com/Ian-Trust