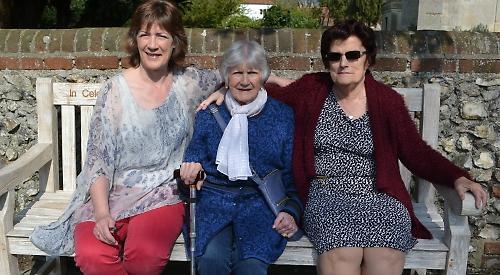 The recycled plastic seats are outside St Helen’s Church and near the village library.

They were officially unveiled on Thursday last week by Benson Parish Council chairwoman Pat Peers along with Françoise Manvell, who celebrated her 90th birthday in 2016, the same year as Her Majesty, and her daughter Patricia Baylis, who chairs the council’s recreation and lands committee.

The benches cost £1,150 and were paid for with a £893 grant from South Oxfordshire District Council and the parish council providing the rest.

Councillor Baylis said: “The seats that were here before were in a really bad condition and getting to be quite dangerous. The slats were cracking and the frames were breaking, so they needed to be replaced.

“This is a golden opportunity to celebrate the Queen’s birthday as well. She’s our head of state, our Queen, and we thought it was important to mark that as a parish.”

Each bench has an inscription that reads: “In celebration of the 90th birthday of Her Majesty Queen Elizabeth II.”

Cllr Baylis said: “I think they are fantastic — I really like them. We wanted something that was maintenance-free and looked good and I think we have achieved that.

“The bench outside St Helen’s, in particular, is very well used. A lot of people walking their dogs or around the village use it and perhaps those waiting for the church to open.”

Mrs Manvell, of Chapel Lane, who celebrated her birthday on December 20, said: “I think they’re wonderful — I want one for my garden!

“It shows respect and affection for the Queen, whom I admire very much. I was born in France but I promised to be a good citizen!

“I do think that the Queen and I were born in a very good year. I’m very privileged to still be here in her distant company.”

Councillor Peers said the council wanted to commemorate the Queen’s birthday in a permanent way.

“She been marvellous over her 90 years and I think all parishes should have marked the occasion with something like this.

“The Queen is linked with Benson as RAF Benson was the home of the Queen’s Flight for many years.”

Cllr Peers added that the seats were of good quality and when other benches in the town needed replacing recycled plastic ones could be used again.