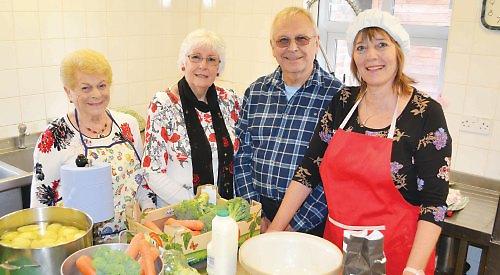 A NEW £38,000 kitchen is to be installed at the Millstream day centre in Benson.

The modernisation project is needed because the current kitchen doesn’t have enough working surfaces and cook Michelle Jones finds it difficult to use the old-fashioned, solid plate hobs.

Geraldine Gault, who chairs the centre’s management committee, said: “The kitchen really isn’t particularly fit for purpose in 2017. It’s very ineffective. We have comments from people doing the catering saying what a nightmare it is.

“This investment is the future-proofing of the kitchen if you like. It’s a fairly comprehensive redevelopment.

“We thought about doing bits and bobs here and there but the reality is it’s probably more cost effective to start almost from scratch.”

The centre currently has about 50 members who can have a hot two-course lunch on Mondays, Wednesdays and Fridays. But Mrs Gault said: “We have an ageing population, not just in Benson or South Oxfordshire, but generally and Benson is about to have an enormous amount of development.

“That means a lot of people moving into the village and some will need something like we provide.

“It’s a whole rethink really about how the kitchen should feel and be up-to-date for, I would say, at least the next 20 years.”

The new kitchen will have a new commercial dishwasher, induction hobs, new flooring, new cladding on the walls and more workspace.

Mrs Gault said that if applications for grant funding were successful the work would begin in July.

The centre has applied for grants from South Oxfordshire District Council, the Benson Bulletin and God’s House in Ewelme. It has also received a £10,000 anonymous donation from one of its members and been fund-raising itself.

Mrs Gault said: “If everything comes through we should be able to cover it.

“Obviously, if one of the grants doesn’t come through, or isn’t as much as we would hope, we do have some money in the bank we could dip into but we would then have to fund-raise to replace it.

“I am quite excited about it because it’s a sensible thing to be doing now.

“The visitors seem quite excited about it as well. They are very fond of Michelle and they know sometimes she struggles with the space in the kitchen and the solid plate hobs.

“Their affection for her is part of the driver that she should have nice kitchen to work in.”

Mrs Jones, who has been at the centre for more than 12 years, said: “It’s just lack of space and the layout — everything is everywhere.

“We’re really excited about it and so pleased the committee are doing it for us. The only thing they have refused, which I’m upset about, is they won’t let me have a pink kitchen!”

The centre costs £43,000 a year to run and it may now be let out on Tuesdays and Thursdays, when it doesn't cater for the elderly, and at weekends.

Mrs Gault explained: “We’re hoping to let it out on a more commercial basis and we have permission from Soha, which owns the building.

“If we’re letting the centre commercially it would certainly be a more popular option with a decent kitchen.”

The centre is appealing for people to support the centre’s fund-raising events the first of which is a craft fair tomorrow (Saturday) from 10am to 3pm.

It is also organising an open gardens day in Preston Crowmarsh in July and an Italian night at the centre in August.