Thoughtless dog owners to be shamed with pink paint 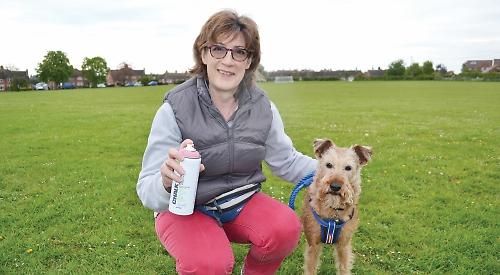 DOG owners in Benson who don’t pick after their pets are being warned they will be shamed — by pink paint.

Benson Parish Council says there has been an increase in dog fouling in recreation areas and on footpaths and pavements around the village in recent months.

Now it is going to highlight the problem of inconsiderate owners by spray painting the evidence.

Vice-chairman Jon Fowler said: “Some people allow their dogs to foul and then they don’t pick it up and the anecdotal evidence is that this problem has got worse.

“In particular it seems to happen on the primary school playing field, where there is a risk to children.”

Other areas affected included the Sunnyside recreation ground. Councillor Fowler said the council had been considering how to combat the problem when it learned that Chalgrove Parish Council had begun using the paint idea with the help of considerate owners.

He said: “They painted around the mess as a way to alert people walking so they didn’t tread in it but also to shame dog owners who don’t pick it up as a way to get them to do so.

“The parish council went for pink paint which is biodegradable, so it disappears. We gave some pink paint to dog owners who do pick up and who spray it around the mess that’s not picked up. It’s not particularly scientific but it’s difficult to miss, which is the intention. I was in Dorchester where they use a blue spray.

“The only other option is to fine people and in order to do that we need to have evidence which is difficult to gather and can lead to confrontation.

“By doing this we’re taking a softer approach and hopefully encouraging people to do the right thing.”

Cllr Fowler said the council would monitor the effect, adding: “It has certainly generated a lot of conversations on Facebook and among people around the village so, if nothing else, it has got the word out. It needs people talking about it as that’s half the battle.

“Time will tell. We’re going to leave it a couple of months and then judge whether it has been a success.”

He said the council could also put up more signage but this would be costly. Councillor Patricia Baylis, who chairs the council’s recreation and lands committee, is one of the dog owners who does the spray painting.

She said: “There are a few of us who carry the spray cans and it’s not particularly onerous.

“I’m in favour of anything that encourages people not to leave their dog poo lying around. I’m just hoping it works. I don’t think we’ll ever eradicate the problem but if this helps reduce it I’m all for trying it.”

Cllr Baylis, who owns a 10-year-old Irish terrier Ruby, added: “Being a responsible dog owner, it has always irritated me that a small minority of owners give the rest of us a bad reputation.”