Eye cancer woman dresses up as pirate to raise awareness 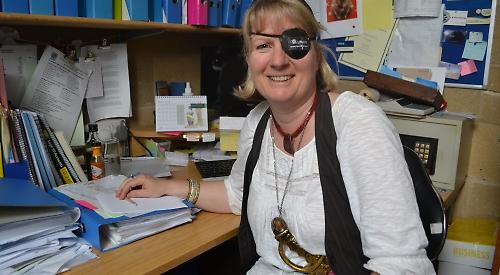 A WOMAN dressed as a pirate for a day to raise awareness of an eye cancer she experienced first hand.

Anna Field, 49, who is Benson Parish Council’s responsible financial officer, wore an outfit that included an eye patch and pirate’s hat and carried a plastic cutlass.

She took her son William, five, to school at Benson primary, attended work, cycled to and attended a meeting in Wallingford and did her weekly shop in the costume.

Her son also dressed up after finishing school to help his mother raise awareness.

Three years ago, Mrs Field was diagnosed with an ocular melanoma in her left eye after it was spotted during a routine eye test at Boots in Wallingford.

Mrs Field, from Preston Crowmarsh said: “I had no symptoms whatsoever. The optician said, ‘I can see something funny on your retina’.”

She was referred to the John Radcliffe Hospital in Oxford and then a specialist centre at the Royal Liverpool Hospital.

In June 2014 she had a radioactive plaque placed behind her eye for a week to shrink the 4mm tumour.

Now she requires annual checks and still suffers from a blind spot on her left hand side and double vision which is corrected by glasses.

She is also slow to react to changing light conditions because the tumour was near the muscle at the back of her eye.

Mrs Field said: “I am doing this to raise awareness of eye cancers and remind people of the importance of getting regular eye examinations.

“Although it’s a rare form of cancer, with around 600 new cases each year, it is easily detected by regular eye examinations by an optician as part of a routine eye test.

“I am also supporting Ocumel, a charity that assists people with ocular melanomas.

“I like the idea of the eye patch — it makes you think of the eyes and it’s a bit of fun.

“I think awareness is as important as raising funds.”