Villages stage Great Get Together 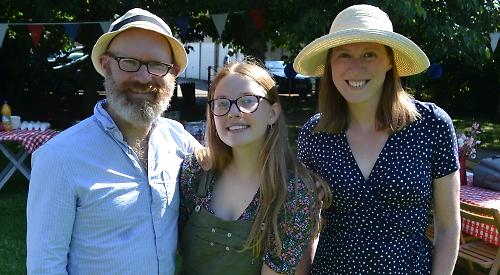 RESIDENTS of Benson and Watlington united to celebrate the memory of murdered MP Jo Cox at the weekend.

They staged two community events as part of the nationwide Great Get Together campaign organised by her husband Brendan.

The campaign was themed around the Yorkshire MP’s first speech to Parliament in which she said: “We are far more united and have more in common than that which divides us.”

Adrian and Steph Lovett, of Brook Street, Benson, organised a picnic with tea and cake and music on the Benson Primary School playing field on Sunday while Aggie Tate arranged a get together in the Paddock, Watlington, where she lives, on Saturday.

Mr Lovett knew Mrs Cox for about 15 years and they worked together for Oxfam, when she was head of policy and he led the campaign team.

About 250 people attended the event in Benson, including the Lovetts and their children Harry, 14, and Ellis, 16, who played music and sang with Max Godwin-Suttie and Emily Morris.

Mr Lovett said: “It went better than we possibly could have hoped for. People seemed to come with a smile on their faces.

“It’s almost as if they detected something of the mood and what we were trying to do. I watched countless times people going up to strangers and introducing themselves. It was young people talking to older people and people from different backgrounds.

“Of course it is bittersweet. We would all have Jo back in a heartbeat if we could but what happened on Sunday was something she would have loved — the music, the cakes, the friendship — and that was the thought in my mind.”

Members of the Watlington Concert Band and Chinnor Silver Band both performed and sea shanty band the Monkey Fists closed the afternoon.

Mr Lovett added: “One thing we all have in common is our village so this was a great reminder to me and other people that it’s a great place to live.

“People had that pleasant surprise that actually their neighbours were not so different from themselves and that we all share something in common.”

Villager Alice Jones-Evans, who attended the picnic with her family, said: “We like Benson and the
community.

“This seems like the right thing to do and it’s nice to get together with friends and people you don’t know as well. Mrs Cox’s husband said the purpose of her death was to divide the country and I think this is bringing the country together.”

About 200 attended the event in Watlington with picnics, cakes, games of croquet and a bouncy castle for children.

Pippa Tolfts, who attended  with her children, Alexia and Thomas, said: “It’s a nice community event and a really good idea, especially after all the bad things that have happened in the last few months.”

Jo Williams said: “When something like [Mrs Cox’s death] happens, it really gives you a sense of how important community is and getting together with people on your doorstep.”

Mrs Cox, a mother-of-two, was Labour MP for Batley and Spen in West Yorkshire and chaired the all-party parliamentary group Friends of Syria.

She was shot and stabbed to death in Birstall, where she had been due to hold a constituency surgery, on June 16 last year.

Five months later, Thomas Mair was jailed for life after being found guilty of her murder.