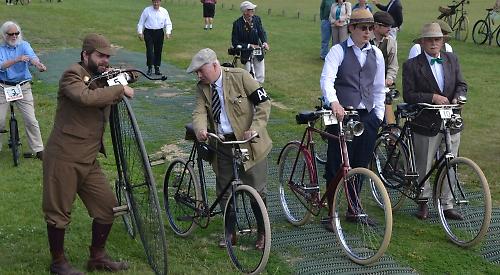 The participants, many of whom were dressed in period costumes, gathered at the Sunnyside playing field before the start.

They were set off individually by master of ceremonies Pete Eldridge, beginning with two men on “boneshakers”, which are named after the uncomfortable journey they gave their riders.

The cyclists followed a 13-mile route through Benson Aerodrome, had a mid-morning stop at Tithe Barn in Ewelme, then went to Chalgrove via Hollandtide Bottom for lunch at The Lamb pub. After lunch they followed a circular route through Berrick Salome and Roke back to Benson.

All machines had to be pre-1929 and some dated as far back as 1869. Mr Eldridge said: “We had 150 entries and, of those, we probably had 125 people on the road. It’s not quite as many as normal but it’s still a significant amount.

“The rally went superbly. It’s a big event for a small committee to run and we have worked hard this year to make sure it runs smoothly and we think that has paid off.

“We had to recover only three bikes, which is good. You get punctures and mechanical problems and I know one guy had his brakes go on him.

“We have had a lot of good feedback — a lot of people said they were very pleased with the route and that they had a great day.

“It’s one of the biggest events of its kind in Europe, let alone the UK. People come from all over the country. They are all cyclists who like old technology.”