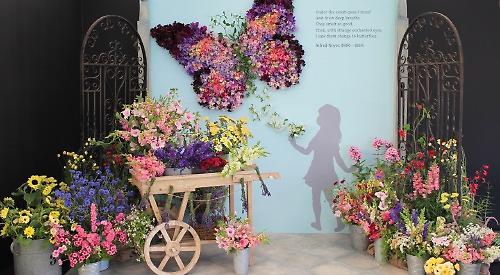 A FLORIST has been awarded a silver gilt at last week’s Hampton Court Palace Flower Show for her display.

Jo Wise, 46, who runs the Floral Circus at Oakley Wood, near Benson, was asked to design a stand for the Royal Horticultural Society show by a collective of British flower growers, Flowers from the Farm.

All the flowers in the stand were grown by members — including Tamsin Borlase, from Bosley Patch which is based at Swiss Farm in Henley, and Juliet Bennett of Babylon Flowers, Cuxham.

The display was based around a poem by Alfred Noyes, called A Child’s Vision, and the work of children’s book illustrator Hilda Boswell and attracted the attention of Noyes’ daughter and granddaughter, who herself is a member of Flowers from the Farm.

Sheila Hume, of Blue Hen Flowers, visited the stand with her mother Margaret Nolan and both were delighted with Mrs Wise’s work.

Mrs Wise, who lives in Swyncombe, said: “Flowers from the Farm invite a designer each year to design for them and each year they get a slightly different look.

“The theme was ‘mini beasts and bugs’. I immediately knew where to look for inspiration as a few months earlier my friend had shown me a beautiful poem by Alfred Noyes.

“I had quite a strong connection to that poem. I have an eight-year-old daughter who is often lost in daydreaming, really happy and in the garden looking for bugs and butterflies, so it connected to me because of her. I could almost design it from the heart. I designed the stand and submitted it and only found out much later, once the design was circulated around Flowers from the Farm, that the granddaughter of Alfred Noyes was a flower grower herself and a member. She thought it was beautiful and really loved it.

“What I said to her was that I was convinced that I was a vessel for the poet. I also only found out much later that Alfred Noyes wrote persistently through the Thirties about the concerns he had about commercial growing of flowers costing them their scent.

“British-grown flowers often have a much stronger fragrance than imports — so this added connection to Flowers from the Farm was a wonderful surprise.” Mrs Wise said she had received plenty of positive feedback about her work. She said: “When the poet’s granddaughter emailed me a picture of her mother it brought a tear to my eye.

“Because I painted the silhouette of a little girl daydreaming, and the poet wrote this poem for his daughter and here she is, as an older lady with her shadow as a little girl behind her.

“I was really thrilled with the silver gilt. That’s the highest medal that Flowers from the Farm have got at Hampton Court so I was pleased to get them that and, of course, it’s a great honour.

“Lots of work went into it so it’s nice to be recognised. I’ve never grown but I have an absolute love of garden-grown British flowers so I use them as much as I possibly can and promote them.”

Hampton Court Palace Flower Show is the world’s biggest annual flower show and was first held in 1990. An average of 130,000 people attend the show every year.