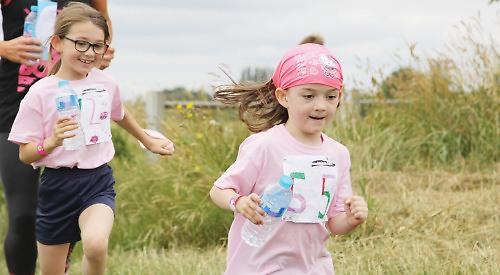 ALL 190 pupils at Benson Primary School raised more than £5,000 for Cancer Research UK by holding a Race for Life event.

Every class, from reception children to year six, and staff ran a 5km route from the school to Warborough and back. Year two teacher Lianne Berry ran it twice.

Pupils wore pink T-shirts in support of the cause and race numbers that they had designed themselves in class. Some also wore signs on their backs paying tribute to loved ones who have fought cancer.

Volunteers made up of families and friends of the school cheered on the runners and handed out achievement stickers at the 1km, 2km and half way marks. The run  was followed by a picnic on the school playing field.

Tania Hadfield, teaching assistant and PE co-ordinator at the school, said: “It was such an emotional event, not only because we had a chance to think about those affected by cancer, but because we saw the amazing support that the pupils gave each other. Even our nursery children got involved, joining in the warm-up and then completing an assault course on the school field.

“The atmosphere at these events speaks for itself. The children have an amazing time, while we are able to highlight the importance of supporting charities such as Cancer Research.

“We first ran the Race for Life in 2015 and were astounded by the £4,000 raised that year. It was such a wonderful event, so we are thrilled to have raised even more this year. I’m so proud of the children and what they have achieved.”