Children on track at creative workshop run by Lego fans 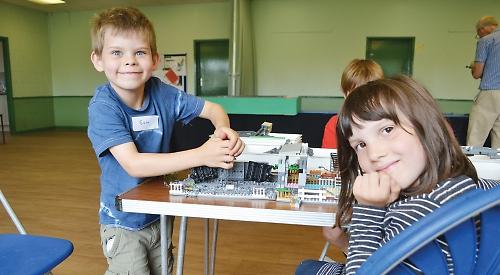 The event for the five- to nine-year-olds was run by You-Superstar, which was founded by Caversham couple Erica and Mike Grieve to encourage children to be creative and work together. Mrs Grieve, 37, said: “The children were given the bare bones to make the train track and then had the opportunity to customise it.

“Once they had completed the sections of track it was put together to form a 2.5m bridge. The children loved it. We overran on the session because the kids wanted to watch the remote control train go around the finished track. They each took turns to drive the train.”

The couple started the business in June after seeing how much their daughters, Holly, five, and Chloe, eight, liked Lego. Mrs Grieve added: “Our girls are absolutely obsessed by Lego Friends and the Super Heroes. It’s a fun, rainy day activity. My husband has always had Lego and he’ has never grown out of it!”

Mr Grieve’s Lego creations are on display at the Museum of the Great Western Railway in Swindon.