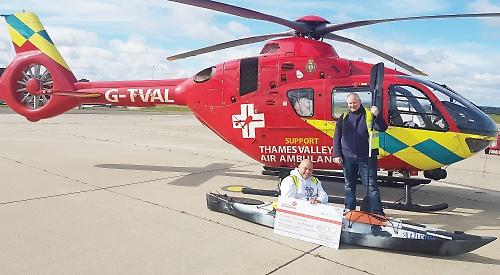 A LORRY driver from Benson who paddled 90 miles in a kayak for charity has presented a cheque for almost £1,500 to the Thames Valley Air Ambulance.

Ian Trust negotiated 105 locks on his journey along the Kennet and Avon Canal and River Kennet from Bristol to Reading last month.

The challenge took him two-and-a-half days and he was supported by friend Phil Diment, from Reading, who cycled alongside the waterways and helped collect donations in buckets along the way.

The pair visited the charity, which is based at RAF Benson, on Thursday last week to hand over the money. Mr Trust, 51, a semi-retired author, of Porthill Road, will attempt to paddle 184 miles from the source of the River Thames to the Thames Barrier for the charity next year.

“It’s very local and a great cause,” he said. “The charity says it costs about £2,500 per mission so if we can raise £5,000 we could potentially save two lives.

“They do wonderful work and I will do anything I can to help as the money raised will make a big difference.”

To join Mr Trust and Mr Diment on their next challenge, which runs from August 20 to 25 2018, email ian.trust@btinternet.com