Garden of remembrance opens at RAF base for fourth year 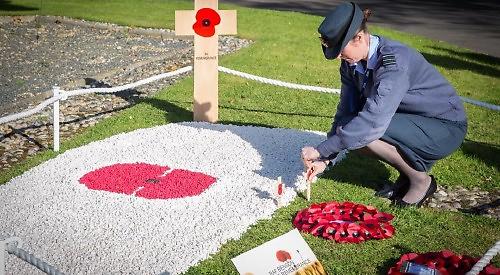 A GARDEN of Remembrance has been opened at RAF Benson for the fourth consecutive year.

Station commander Gp Capt Hamish Cormack unveiled the garden at a service for the fallen attended by members of the Military Provost Guard Service as well as service personnel, civil servants and members of the community.

Padre Philip Corrigan delivered a short blessing before a minute’s silence was observed.

Gp Capt Cormack laid the first poppy cross and wreath and was followed by Lynda Atkins, chairwoman of the Royal British Legion in Oxfordshire, laying a wreath.

The garden, which is in front of the base’s Spitfire gate guardian, was organised by the Military Provost Guard Service in memory of all those who have served. Anyone can buy a poppy cross from the main guardroom and place it in the garden with all the proceeds going to the Poppy Appeal.

Gp Capt Cormack said: “It feels very fitting that there is an appropriate reminder, as we enter the camp, of the sacrifice that RAF Benson personnel have made since the station opened.

“That the garden is under the wing of our Spitfire gate guardian is a reminder of our past and the very special courage of the photo reconnaissance unit.

“However, it should be remembered that the vital work of the Royal British Legion is not only about providing support to the, sadly, diminishing number of Second World War and Korean War veterans but also about supporting serving personnel and their families and veterans of all ages.”