Man, 91, saved from fire by neighbour 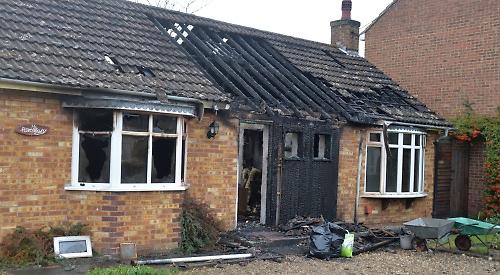 AN elderly man was rescued by a neighbour before a fire engulfed his home.

Bill Cox, 91, was dragged to safety by Patrick Swain, who lives two doors down in Crown Lane, Benson.

He suffered burns to his face and legs and the effects of smoke inhalation and is still recovering in the John Radcliffe Hospital in Oxford.

His bungalow, where he has lived for more than 50 years, has been reduced to a charred shell.

The cause of the fire is under investigation but it is understood to have started in the bedroom when a mattress caught fire.

The drama unfolded at about 11.30am on Friday when flames were seen leaping out of the property together with a pall of dark grey smoke.

Mr Swain, 49, a freelance chef, said a courier was delivering a package to his home when he told him there was a fire at Mr Cox’s property.

He said: “I saw smoke billowing out of the front door like you wouldn’t believe so I went over.

“There were significant flames coming from the bedroom which is at the front of the house. The door was open and I put my head in the doorway and it was so hot it knocked me backwards.

“I shouted Bill’s name and he answered, saying, ‘I’m in my bedroom’. I shouted, ‘I don’t know where your bedroom is’.

“When he shouted I couldn’t tell where his voice was coming from because of the smoke and the noise from the crackling of the flames.

“I said to him that if he could get to the doorway of his bedroom, so I could see him, then I could drag him out.

“I couldn’t really see a thing. I just saw a silhouette of him standing in the doorway. I rushed in very quickly and dragged him out.

“I had my arms around the back of him and manhandled him in a nice way out of the property.

“The smoke and the heat was the worst thing. I held my breath so there was no smoke inhalation but I singed my hair.”

Mr Swain played down being a hero but said he had probably saved Mr Cox’s life. “He wouldn’t have got out quickly enough by himself,” he said. “He’s 91 and doesn’t move very quickly.

“I don’t like hero status but he would have succumbed to the fumes, I think, if no one had rushed over there.

“His hair was very badly singed and one side of his face was quite badly burnt. You could see where his trouser leg had been on fire. He was coughing as well.”

Mr Swain, who has lived in Crown Lane for more than 40 years, said Mr Cox was a “lovely gentleman”.

He added: “It’s just a shame that most of his personal things have gone — his memories have gone up in flames. That’s the worst thing.”

Firefighters were called to the scene and arrived after Mr Swain had got Mr Cox outside.

Crews came from Wallingford, Didcot, Abingdon and Slade Park, Oxford, and eight firefighters wearing breathing apparatus battled to bring the blaze under control and prevent it spreading to the attached garage and a neighbouring property.

Selina Walker, who lives opposite, said: “It was quite a shock. I was in the house and I had a friend round and as she was leaving she said, ‘have you seen what’s happening out here?’ Before that we’d heard a lot of shouting.

“All of Bill’s house was on fire. There was smoke coming out of the top and flames at the front.

“There was a lot of noise as windows were breaking and electrics were sparking. We were quite concerned about what was going to happen next.

“The first thing the firefighters wanted to know was whether anyone was inside and making sure the property had been cleared.

“Bill was sitting outside one of the houses up the road. A neighbour had brought a chair out for him and a blanket and he was being looked after.

“A lot of the neighbours were outside obviously very concerned about him and making sure he was okay.

“Bill’s a really lovely, friendly man. He’s quite often out looking after his garden and always says ‘hello’ and wants to know how my children are.

“The last I heard he was still in hospital. His son and the family have been over clearing the house.”

Another neighbour, Janet Bottomley, was sitting in her living room when she noticed the fire. She said: “I was having a coffee and I looked out across the road and saw flames coming out of the front door. I couldn’t believe my eyes.

“Everything after that is a bit of blur, to be honest. I heard that Patrick went in and carried Bill out.

“By the time I went out he was already out sitting on a chair at a neighbour’s up the road.

“I think Bill’s lucky to have got out when you see the state of the house. The place is gutted.

“There’s nothing left, it’s just a shell, no clothes, nothing. The only thing he’s got is his car which was in the garage but somebody managed to get it out.

“It’ll break his heart because his garden was so important to him — he used to spend hours in it.”

Mrs Bottomley said she had known Mr Cox for about 30 years. He lived alone after his wife, Ethel, died several years ago.

“He was a gardener at the Springs Hotel in Wallingford many years ago before he retired. He’s a great gardener and never stops working.

“He never asked for help. He’s a very independent person.”

Mark Thomson-Tur, who also lives in Crown Lane, said: “It’s really sad that this chap has lost his house. We’re happy that he seems okay, if a bit shaken. I’m very pleased that he got out.

“He’s an old hand in the village, very well known, and active given his age.”

Donald Ayres, a friend of Mr Cox’s, said he hoped to visit him in hospital.

Incident commander Darran Hookway said: “The male occupant was alerted to the fire because he heard his smoke alarm sounding.

“Unfortunately, during his escape, he suffered burns to his face and legs and also suffered smoke inhalation.

“He was treated at the scene and conveyed to hospital by our colleagues from South Central Ambulance Service.

“The fire in the property involved all rooms and the roof and spread throughout the structure very quickly.

“I would urge members of the public to always get out, stay out and call the fire and rescue service if faced with a fire in their property.”