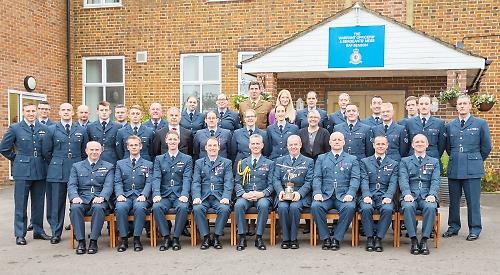 THE Stainforth Trophy was presented to RAF Benson by the Chief of the Air Staff, Air Chief Marshal Sir Stephen Hillier, at a special honours and awards ceremony at the base.

The trophy is awarded annually to the RAF station deemed to have contributed the most to the delivery of air power, while maintaining a high level of community engagement, honouring and protecting heritage, charitable fund-raising and sporting activity.

During 2016, RAF Benson was heavily committed to operations and exercises across the world, including the ongoing Puma deployment in Afghanistan.

Several squadrons also marked significant anniversaries with associated parades while numerous personnel were commended for their personal and professional achievements.

Gp Capt Hamish Cormack, station commander, said: “I am truly delighted that the quiet professionalism consistently shown by the men and women here has been recognised by this award. The Benson team can feel justifiably proud of the part they have played, and continue to play, in our many achievements.”

Air Chief Marshal Hillier also presented medals and commendations to personnel from across the station.