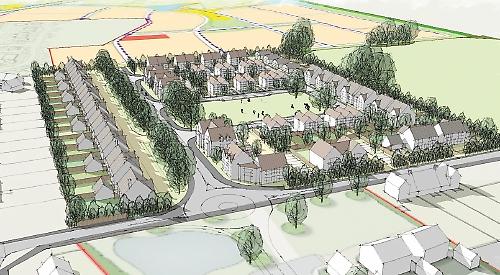 A DEVELOPER has submitted a planning application for 84 new homes in Benson.

Thomas Homes, of Thatcham, wants to build on land west of Hale Road, which has been earmarked for 80 properties in the village’s draft neighbourhood plan.

The development would include a section of a proposed “edge road”, or bypass, that would run to the north of the village.

The new road is essential to reducing the amount traffic going through the village as residents face the prospect of hundreds of new homes.

It will also rely on different developers delivering separate sections.

The majority of houses and flats would be have up to three bedrooms and 33 of them would be “affordable”.

The outline application says the site is one of four to the north of Benson earmarked for new homes in the neighbourhood plan,

A design and access statement by Woodfield Brady Architects, of Newbury, says: “It is the smallest of these strategic housing allocations and sits centrally between the other larger sites to the west and east of it.

“The plan proposes these particular sites for development on the basis that the associated developers will jointly fund a bypass, which will pass through these sites, to help alleviate traffic in the village centre.

“Access to the dwellings will be predominantly via the new edge road running west-east through the site with a new roundabout proposed at the intersection with Hale Road.

“Dwellings located in the north-eastern corner of the site will be accessed directly off Hale Road.

South Oxfordshire District Council, the planning authority, will make a decision by February 6.

The neighbourhood plan names sites to the north of the village for 320 new homes.

It was due to go to referendum early next year but the proceess has been delayed because the district council has not yet completed a habitats regulations assessment.