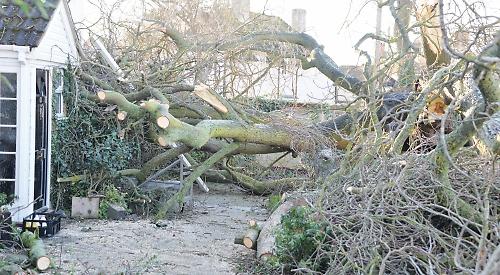 RESIDENTS had a lucky escape when a 66ft tree came crashing down in high winds, narrowly missing their homes and cars.

The horse chestnut fell into the front gardens of three semi-detached properties in Brook Street, Benson, obstructing the front doors of two of them.

The tree also brought down telephone wires and destabilised the telegraph poles.

The drama happened at about 9.45am on Wednesday last week.

She was alerted by her next-door neighbour Nichol Clarke whose land the tree was on.

Mrs Holmes-Siedle, who has lived in Brook Street since 1991, said: “I was at my mother’s house in Thame when Dr Clarke rang me.

“He said the tree had fallen and told me what had been damaged. I had to wait for the carer for my mother to arrive before I could go back home. When I arrived, it was utter shock obviously — I didn’t realise how big the tree was and it could have been a disaster. The tree is huge but it’s very sad because it’s a beauty.”

Her next door neighbour Juliet Glavey said: “We were obviously shocked and stunned. We feel incredibly lucky that we have so little damage because it could have taken the houses out.

“It’s sad for me because I loved that tree. The wonderful thing is it went straight down without harming anybody.”

Fire crews from Oxford and a specialist rescue unit from Kidlington fire station were called to the scene.

They established a safety cordon and warned members of the public to stay at a safe distance. The crews used chainsaws to remove branches from the tree and police closed the road for about an hour while they worked.

Staff from BT Openreach were also in attendance.

Dr Clarke said: “The tree came down gracefully after yet another stormy night. It was a very old, very beautiful tree. It was a bit of a landmark in the village.”

He said he was relieved no one was injured.

“If you look at how it has fallen it’s pretty extraordinary,” said Dr Clarke. “There were cars right along the road with not even a scratch. If it had fallen five degrees either way it could have been catastrophic.”

Sarah Lye, who lives opposite, said: “I was in my bedroom when I heard a really loud crack so I looked out and saw the tree going over.

“I shouted, ‘the tree’s gone down’ as I had my whole family here.

“I was worried it had gone into a house, so we shouted at the neighbours ‘are you all right?’ and they said ‘we’re all okay and accounted for’.” She said two of the cars parked in the street belonged to her family.

Mrs Lye said: “There’s literally one channel where the tree could have fallen without damaging cars, people or houses and it fell down that channel — it’s unbelievable. The funny thing is we had been worried about that tree for quite a few years. It was diseased and extremely heavy.”

She said the tree was inspected several years ago, adding: “I don’t remember them saying it was an imminent danger but I’m pleased we don’t have to worry about it anymore.”

Dennis Saw, 93, who also lives opposite, said: “I was having a cup of tea and I looked out of the window and I saw the tree come down past the window.

“I went out to see if anybody was about or injured but luckily nobody was. It’s lucky nobody was passing at the time.

“I was not really surprised because the tree had been leaning for some while. It must have blown over by a sudden gust of wind.”