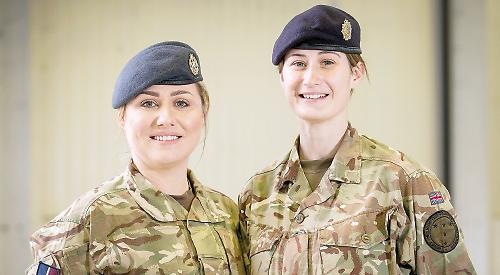 TWO servicewomen from RAF Benson who pulled a driver to safety moments before his car burst into flames were nominated for a national award.

They immediately called the emergency services and saw that the unconscious driver was trapped in the smoking vehicle.

The pair worked together to pull the man to safety just minutes before the vehicle erupted in flames.

LCpl Clarke said: “I finally got the door open, jumped over the top of the guy to get underneath him and got his seat belt off.

“I managed to get him on to my shoulder and boost him up towards the top of the car and Vicki had got hold of his arm and was pulling him up.

“I then had to get around him and climb on top of the car so we could work together and pull him out.”

Cpl Keats added: “I’d like to think that anyone would do what we did. We were just lucky that we were there to help.”

The women were nominated in the hero at home category of the Sun Military Awards, held last month.

They have since received a commendation from the station commander at RAF Benson, Gp Capt Hamish Cormack.

The Operation RUMAN team won the special recognition award, presented by Prime Minister Theresa May, for their efforts in providing relief aid in the Caribbean after the devastation caused by hurricanes Irma and Maria.