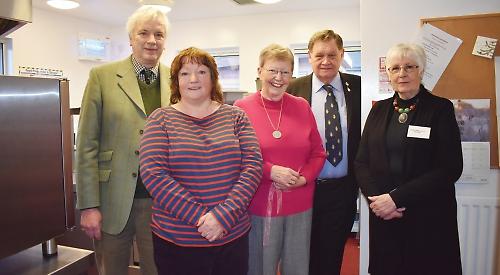 A NEW £40,000 kitchen has been officially unveiled at the Millstream Day Centre in Benson.

A ribbon was cut by Councillor Jeannette Matelot, chairwoman of South Oxfordshire District Council, which gave £17,500 towards the refit, and centre member Julia Minall, whose £10,000 donation sparked the project.

There was also a grant of £2,000 from Tesco in Didcot and donations from Benson Parish Council, the Benson Community Association, the Benson Bulletin  and God’s House in Ewelme.

Representatives from each organisation attended Monday’s opening ceremony, which was followed by tea and cake.

The centre can seat 34 members who can have a hot two-course lunch on Mondays, Wednesdays and Fridays.

The old kitchen had solid plate hobs and not enough working surfaces for chef Patrick Swain.

Geraldine Gault, who chairs the centre’s management committee, said: “I’m thrilled. It’s amazing to get something that is future-proof and it has added value to the building.

“It gives us the potential to do more. For fund-raising events, like our Italian evenings, when you’re catering for 60, to have a better functioning kitchen will make such a difference.

“The volunteers are quite elderly so for them not having to lift great big plastic trays loaded with crockery will also make a difference.”

Mrs Gault said the new kitchen would also make the centre more appealing to commercial hirers. She thanked treasurer Andrew Brooker, a former head of finance at the Royal Borough of Windsor and Maidenhead Council, who helped the centre secure grants, and centre vice-chairman Rob Wadley, who managed the project.

The centre costs £43,000 a year to run of which half is recouped through its lunches.