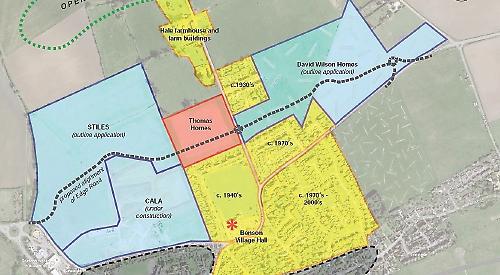 BENSON does not need a bypass, a public inquiry heard.

The claim was made by a lawyer for landowner Ray Stiles who is appealing against a decision by South Oxfordshire District Council to refuse outline planning permission for up to 120 homes on land south of Watlington Road.

The inquiry at Benson parish hall, which began on Tuesday, heard that the relief road was a vital part of the Benson neighbourhood plan,  which names thre suitable sites for 560 new homes.

The developers would be expected to fund the road in order to help to alleviate congestion in the village centre.

But Sasha White QC, for the appellants, told the inspector John Felgate than there was no need for the route.

He said there were “major issues” of housing availability, affordability and provision for young people and those on lower incomes in South Oxfordshire.

“The council will have to show that the [negative] impacts of granting permission significantly and demonstrably outweigh the benefits of the proposal,” said Mr White.

“The appellant is firmly of the view that the council cannot demonstrate this.”

He said the council could not show it had a five-year supply of housing land but housing was needed immediately and the Benson neighbourhood plan didn’t change this.

Mr White continued: “The parish council, in correspondence and in the draft neighbourhood plan itself, have placed much weight on the proposed relief road and the harm that granting permission for this proposal will cause to the neighbourhood plan.

“However, first there is an accepted shortfall of housing in South Oxfordshire, therefore any housing policies in the neighbourhood plan cannot be afforded full weight.

“Second, as shown in the council offcier’s recommendation, the response from the highways authority and... the appellant’s expert Phil Brady, there are no material transport reasons why this development should not be approved.

“In order for this development to be acceptable in transport terms, there is plainly no need for a relief road.”

Mr White said up to 120 homes would make a “significant” contribution to the district council’s shortfall and 40 per cent of them would be affordable housing. Benson Primary School would also receive a contribution towards the cost of its planned expansion.

Robin Green, for the district council, said Benson had already provided “substantially in excess of the requisite level of growth”.

“There are also concerns about the extent to which housing on the site would integrate with the village,” he said.

“A key element of the plan is the construction of a relief road to the north of the village to take traffic away from its historic centre.

“To achieve this, and to ensure the housing needs of the village are met, sites are allocated for residential development on the proviso that they include and fund the relief road.

“These sites are already the subject of either an approval or planning applications that are expected to receive permission shortly. If approved, they would add further to the supply of new housing for Benson.

“In the preparation of the neighbourhood plan, consideration was given to residential development of the appeal site.

“This was rejected on various grounds, including that it would harm the landscape and add to traffic in the village without assisting in delivery of the relief road.

“Development of the site would fly in the face of the Benson neighbourhood plan. It would also conflict with the emerging local plan.  While the need for additional housing land in the district is an important consideration, it does trump all others.”

Mr Green also said the appearance of the 7.9 hectare greenfield site would be harmed, including the Chilterns Area of Outstanding Natural Beauty, and there would be the permanent loss of about 2.2 hectares of best agricultural land.

Mr White said the site was not internationally, nationally or locally designated landscape and was at least 1.4km from the AONB.

Mr White said the appellants’ expert had concluded that only about 30 per cent of the site comprised the best agricultural land.

Mr Green asked Mr Felgate to adjourn the hearing as John Slater, the inspector examining the Benson neighbourhood plan, was due to produce a report in mid March.

He said that if Mr Slater recommended the plan was “made”, this could strongly affect the weight that he as the inspector gave the document.

But Mr White said this would affect the evidence, adding: “There are often development plans in various stages of genesis and the same argument could be made about the overarching local plan.”

Mr Felgate said he would consider the issue during the inquiry, which was due to end today (Friday).